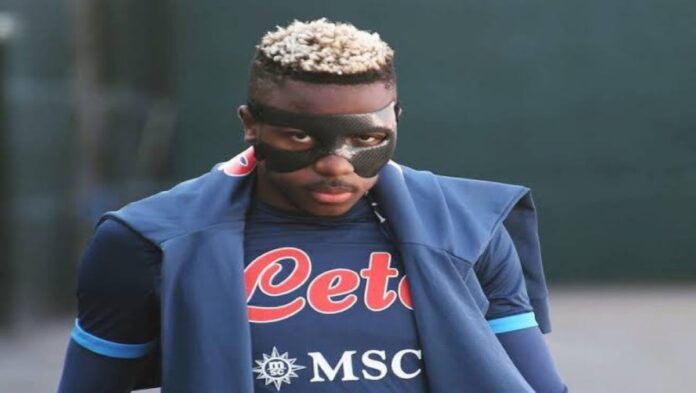 Nigerian international footballer player, Victor Osimhen has been nominated by Serie A leaders of Napoli for the club’s 2022 Goal of the Year and Assist awards.

The 23-year-old Nigerian international has been called up along with four Napoli players. Giovanni Simeone, Piotr Zelensky, Khvisha Kvaratskhelia and Elgov Elmas.

Osimhen’s stunning goal against Roma in October was named one of the best.

Fans will have a hard time deciding whether Osimhen’s moments are better than Kaffarra’s game against Monza, Simeone’s header against AC Milan, Zielinski’s finish at Empoli, and Djamel Elma’s against Udinese.

The Nigerian striker was a mainstay in Luciano Spalletti’s side, scoring 19 goals for Partenopeans in Serie A and the UEFA Champions League in 2022.

The Nigerian top scorer has scored 38 goals in 76 games for the Partenopeans since 2020.

The former Lille star is also in the running for Napoli’s best assist in 2022, alongside teammates Franck Anguissa, Mario Rui, Khavicha Kvaratskhelia, and Aljev Elmas.

Osimhen’s clever and graceful pass for Napoli’s winning goal in their 2-1 win over Atalanta in November was nominated for the 2022 Assist.

Osimhen took home the Young Player of the Year award for the 2021/22 season, beating out Juventus strikers Dusan Vlahović and Milan duo Leo and Sassuolo Gianluca Scamaka and Giacomo Raspadori for the prestigious accolade, despite scoring fewer goals as the trio.