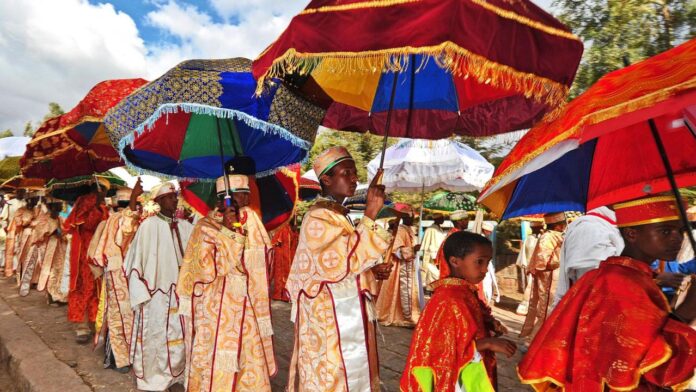 Also, there are some important religious festivals in Ethiopia that the indigenes do not joke with.

The Ethiopian calendar has 13 months, and the locals have their own timekeeping system that does not use daylight saving.

Ethiopia has a diverse religious culture. Thousands of Ethiopians flock to towns during religious holidays to honor old traditions.

For any Christian, these feasts below stand out. Meskel, Timkat, Christmas, and Easter. These festivals commemorate significant events involving Jesus Christ, who is believed to be God’s son.

They believe God sent His own son to live as a man on earth many years ago to save men from evil. Given the amount of effort that goes into making these festivities as vibrant as they appear, Ethiopians place a high value on them.

Meskel festival is a religious event observed in Ethiopia on September 27th, according to the Gregorian calendar.

The event commemorates the discovery of the real cross on which Jesus Christ was crucified.

She had been searching for a long time with no success until one day she had a dream. She saw herself in the dream lighting a large fire that produced a lot of smoke.

The smoke led her to the location of the crucifix. She burned lights to celebrate her achievement after discovering the true cross on which Jesus was crucified.

Demera are celebrations held on the eve of Meskel. Demera celebrations include eating, drinking, dancing, and other joyous activities.

Participants in this festival plant trees in markets and in houses. Meskel is derived from daises placed on tall branches that are linked together.

Those branches are then placed together and lit ablaze with torches carried by the participants.

The procession encircles the flaming branches, known as demera, and sings special Meskel melodies. The burning ritual is presided over by an Ethiopian Orthodox patriarch.

Those who are unable to attend the public celebration organize their own modest demeras at home.

When the demera burns to ashes, it gives interpretation depending on which direction it falls.

It is anticipated to rain on the same day, indicating a successful year. The burning of these branches frequently extends into the night.

The following day, which is the official Meskel festival, they proceed to the location where the demera was burned.

They take up the ash and make the sign of the cross on their brows. As it is believed that they have discovered the cross, there is much feasting and celebration.

Meskel has always been celebrated in lovely weather towards the end of the rainy season.

It is marked by much dancing, feasting, and the lighting of a great bonfire to commemorate the discovery of the genuine cross on which Jesus Christ was crucified.

Meskel comes in second place. The word literally means “cross,” and the feast recalls the revelation of the cross of Christ to Empress Helena, mother of Constantine the Great.

In Addis Ababa, the festivities begin in the early afternoon with a procession of flaming torches approaching Meskal Square from several areas.

They form a circle around the “demera” and hurl torches at it while singing a special Meskel song.

Thousands of people assemble in the Square to wave farewell to the rains and welcome in “Tseday,” the spring season, with its abundant “Meskel” daisies and beautiful sunshine.

The flames become brighter as the evening draws closer.

The blazing pyramid does not completely devour itself until daybreak, when the large tree in the center finally falls.

During the festivities, homes are filled with “tella,” the local beer, and guests are welcome.

This colorful event is not only a public holiday in Ethiopia, but it has also been designated as an Intangible Cultural Heritage of Humanity by UNESCO. Every year, many visitors and tourists from all over the world travel to Ethiopia to see the holy festival.

The Timkat festival commemorates the baptism of Jesus in the Jordan River by John the Baptist. Pilgrims from all throughout the country gather to commemorate the Epiphany. Every year on January 19th, it takes place.

If you want to visit Ethiopia, consider visiting during this period. Timkat is a three-day festival. The re-enactment of Jesus Christ’s baptism is the most amazing portion of the entire celebration.

A replica of the ark of the covenant, known as Talbot, leads the procession to a river. Only the senior priests are permitted to transport the Talbot to a certain location in the river.

Carrying the ark of the covenant to the river represents Jesus’ arrival at the river to be baptized by John the Baptist.

The ark of the covenant houses the 10 commandments given to Moses by God on Mount Sinai. Talbot is holy, and only a few people are capable of handling it.

The procession celebrates alongside the river, where they bless the water. They spray water on the participants early in the morning, about 2 a.m.

Some are plunged in water to reconfirm their baptismal vows. During the festival, a wide range of local Ethiopian artifacts are available. Crosses of various sizes are utilized, as well as traditional clothing and body adornment.

It’s a vibrant scene that complements the Ethiopian music sung during the festival. As a night festival, you will also have the opportunity to witness their old method of producing light.

On January 20th, traditional dances and drumming set the tone for the Timkat festival. Injera, Shiro, kitfo, and berbere are among the specialties served.

To a visitor, they are delicious dishes that can only be found in Ethiopia. They prepare them precisely and use traditional spices to give them the greatest flavor. Ethiopia, as an old civilization, has a rich culture.

Ethiopians believe that angels built the ancient churches where religious celebrations are held. These churches are mostly found in the Lalibela region of northern Ethiopia.

Ethiopia was a Christian country long before European countries. Missionaries arrived in Ethiopia as early as 40 years after Jesus’ birth.

Ethiopia’s early civilization can be explained by its proximity to Egypt, a great monarchy. The queen of Sheba paid a visit to Solomon, King of Israel, and brought him gold and other valuable presents. Ethiopia had gold even back then.

The most amazing aspect is that the country still values those ancient practices, which have remained relatively unchanged despite current changes.

This is also one of the most spectacular and colorful events on the Ethiopian calendar.

It is observed with extraordinary dedication in Lalibela, with chanting, dancing, and singing around the rock-hewn churches built more than 800 years ago.

Tens of thousands of pilgrims from all over Ethiopia and from all walks of life will descend on the historic city of Lalibela.

The majority of pilgrims arrive in Lalibela from remote hamlets and inaccessible valleys, traveling barefoot for days, weeks, and even months to enjoy the Christmas blessing.

Even though Ethiopian Christmas is on January 7, several festivities are done around the rock-hewn churches beginning the night of January 4th.

Fasika (Easter) is celebrated after a 55-day fast during Lent (Hudade or Abye Tsome).

For the whole 55-day period, Orthodox Christians abstain from meat and dairy products.

On these days, vegetarian dishes like lentils, ground split peas, cereals, fruit, and various vegetable stews are eaten with injera and/or bread.

During fasting days, the first meal is eaten after 3 PM (9 o’clock in the afternoon Ethiopian time), except on Saturdays and Sundays, when a meal is permitted after the morning service.

People flock to church on Easter Eve to celebrate with candles lit during a spectacular Easter mass service that begins about 6 PM (12 o’clock in the evening Ethiopian time) and concludes around 2 AM (8 o’clock after midnight Ethiopian time).

Everyone returns home to break the fast with meat from a chicken or lamb slain the night before after 6 p.m., followed by injera and customary drinks (i.e. tella or tej).

Easter, like Christmas, is a day for family gatherings and the giving of presents to express good wishes (i.e. lamb, goat, or loaf of bread).

If you want to visit Africa, there is no greater country with a rich culture than Ethiopia. From their one-of-a-kind Gregorian calendar to their unusual architecture and, most importantly, their enchanting festivals.

There is so much more to see than can be written. There’s a lot of traditional food to try, ornaments to wear, and tunes to sing along to. Meskel and Timkat festivals are the cherry on top.