10 Ethiopian Dishes That Are Most Popular 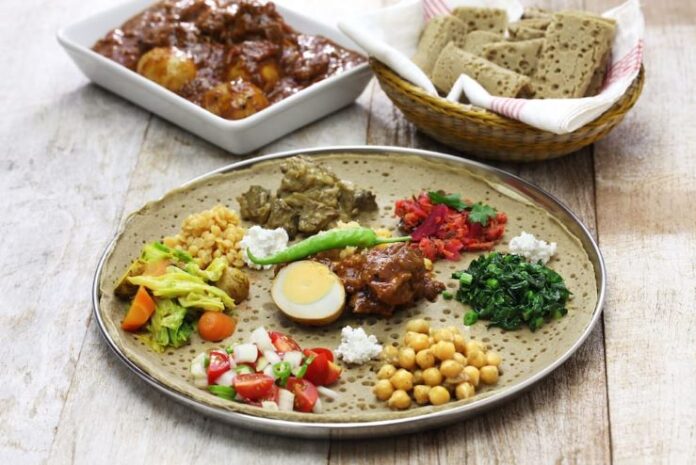 Ethiopian cuisine is a delectable blend of just about every flavour and texture you can think of.

Your taste buds will like these 10 varied and delectable recipes that highlight the finest of Ethiopian dishes. They are spicy, sweet, salty, sour, and aromatic.

The main components in Shiro, an Ethiopian stew, are wide beans or chickpeas, along with garlic, onions, ginger, tomatoes, and chili peppers.

Shiro powder, a concoction of chickpea flour and several spices, can take the place of the chickpeas that give this stew its wonderful texture and nutty flavor.

Traditionally, the dish is made to celebrate holidays like Tsom and Ramadan. Shiro is one of the Ethiopian dishes typically served with injera flatbread on the side.

A big, crispy pancake made of wheat flour, “fatira” is a classic Ethiopian street meal that’s frequently eaten for breakfast.

It is usually served with honey, scrambled eggs, or both. Fatira is frequently divided into tiny pieces and is especially well-liked in Ethiopia during Eid-al-Fitr.

Ethiopian flatbread known as kitcha is produced from wheat flour, water, and salt. Traditionally, the dough is baked in a pan until the exterior is a golden-brown color on both sides.

Chili and cardamom are additional spices that can be added to the flatbread. It is frequently combined with melted butter and served warm or used in a meal called fit-fit.

Injera is quite popular among Ethiopian dishes. Teff, the world’s smallest grain and a supergrain because of its great nutritional value, is used to make this spongy flatbread.

Because it is so well-liked, people often ask each other, “Did you eat injera today?,” which gives the other person reassurance that everything is fine.

Sharing this flatbread when circumstances are tough has saved many Ethiopians alive. It is offered for breakfast, lunch, and dinner.

It has a tangy flavor that is somewhat reminiscent of sourdough bread. After three days of fermentation, the dough is formed into a sizable pancake-like disk.

The list of Ethiopian dishes won’t be complete without mentioning Genfo. Genfo is a basic Ethiopian porridge that is frequently eaten for breakfast.

It is produced by combining dry-roasted barley flour with boiling water and stirring the mixture with a wooden spoon until it acquires a smooth yet incredibly thick consistency.

A hole is then made in the middle of the porridge after it has been transferred to a bowl, typically with the use of a finjal (Ethiopian coffee cup). Spiced butter and berbere spices are clarified and placed in the well.

While it can be served with a dollop of yogurt, Genfo is often eaten without modification. Pulling chunks of the thick porridge from the dish’s outside and dipping them into the center’s spice mixture is a common way to eat it while sharing it.

Doro wat is a festive variety of chicken-based wat stew that is typically purchased from outdoor markets. To get rid of microorganisms, the meat is first soaked in water, salt, and lemon juice.

It is then chopped into eight to twelve pieces. About five minutes before the stew is finished, peeled hard-boiled eggs are put to it so they may soak up all the savory flavors and the delicate red color.

Doro wat is a must-have dish at every celebration, including Christmas and Easter, thanks to its delicate beef, spiciness in the eggs, and rich, savory sauce.

Most Ethiopians chose doro wat as their favored and finally permitted meat-based cuisine on Christmas after fasting for 43 days without meat.

A common breakfast dish in Ethiopia, fitfit is cooked with clarified spicy butter and berbere spices.

Fitfit comes in two primary varieties: one prepared with injera flatbread and the other with unleavened kitcha bread.

A common Ethiopian dish called kitfo is made from freshly ground raw beef, Ethiopian butter (niter kibbeh), and seasonings like salt and chile.

Injera is a standard bread served with kitfo in every restaurant, while other breads are also available.

Although kitfo is typically served all by itself, it can also be served with collard greens or salty cheeses.

Ethiopian food called tibs is made up of stir-fried meat and veggies. The meal can be prepared in a number of different ways, from mild to hot, and it might have a small quantity, a lot, or no vegetables at all.

There are several varieties of this Ethiopian delicacy since various types of meat are used. Tibs is typically served as a festive dish for special occasions and holidays or as a show of respect to someone.

These ingredients are all sold in Ethiopian markets and are combined in a mortar with a pestle to form the spice blend.

This dish, which can be prepared with beef, chicken, lamb, lentils, vegetables, or fish, is the most well-liked in the nation. For religious reasons, pork is never consumed.

Since nothing is wasted in Ethiopia, every beef cut—from organs to fine cuts—is used in the wats, whether it is fresh or dried.