10 Namibian Dishes You Should Try 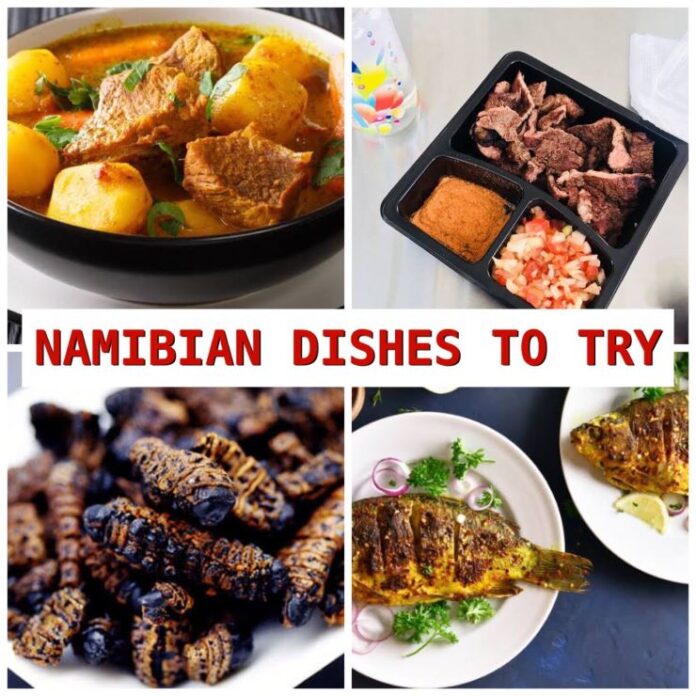 Namibian cuisine is full of flavor and is one of Africa’s most varied and distinctive cuisines.

Namibia is a proud and passionate country, and the food there reflects that. Richness, spice, and a wealth of flavors are all packed into this intriguing fusion of local cuisine.

Prepare yourself for a culinary adventure filled with flair, heat, and amazement as we introduce you to 10 Namibian dishes you should try.

Meat chunks are marinated in salt and vinegar, seasoned, then hung to dry for about two weeks.

Like South Africa, Biltong is also one of the most popular Namibian dishes you have to try out.

The Afrikaners and Dutch utilized this method to preserve meat hundreds of years ago.
People eat biltong as a snack.

Due to its deep, salty flavor, you will have to make a lot of effort not to eat it all at once.
Also, because of the high quality of the meat utilized, Namibia now takes pride in being known as the nation with some of the best biltong.

Biltongs can be made from a variety of meats, including springbok and kudu. Additionally common are beef biltongs.

Having a bag of biltong and cracking open a bottle of sparkling wine is a must for any road trip in South Africa or Namibia.

If you enjoy eating fish and happen to be in the Zambezi region, you should definitely try Zambezi bream.

Zambezi Bream, a species of fish found in the river systems of Southern Africa, is also referred to as dwarf fish.

Fishermen typically catch them all night long and then sell their fresh catch at markets the next morning.

Grilled Zambezi bream is frequently seasoned with salt and pepper. It is customarily eaten with fresh, steaming spinach and maize pap in Caprivi culture.

Many restaurants frequently serve Zambezi bream as their daily catch. Many recipes are enhanced by its vibrant, breath-taking flavor.

German bratwurst is a pork sausage (sometimes made with veal or beef) seasoned with coriander, nutmeg, and caraway.

It is typically grilled or broiled and accompanied by sauerkraut or potato salad, along with Inglehoffer Original Stone Ground Mustard.

Put together a bratwurst sausage, a brötchen (bread roll), pickles, and some of that hot mustard for the ideal Namibian take on the traditional hotdog.

In the Oshiwambo culture, Oshithima is a widely consumed meal. It is a common cuisine in Namibia’s northern region.

Mahangu Pap is a pearl millet-based, gluten-free porridge. It is preferred in some regions when combined with millet or maize flour as well as Mahangu.

Boiling water in a big pot is the first step in making traditional pap. When the mixture has reached a rolling boil, whisk in a thick paste made of flour and water.

In order to reach the correct consistency, add flour gradually. This meal can be accompanied by a number of stews, such as beef stew, spinach and vegetable stew, or even kapana or mopane worms.

Mahangu pap is one of the most significant foods in Owambo life and is a nutritious, satisfying dish.

Do you want to venture outside your comfort zone because you’re feeling adventurous? This is one of the Namibian dishes that leaves you feeling happy if you are really adventurous.

Try out Mopane worms, a peculiar snack that is well-liked in parts of southern Africa, if you ever find yourself in Namibia.

Mopane worms get their name from the fact that during the wet seasons, caterpillars are discovered and harvested from mopane trees. They are a crunchy, unique treat.

To prepare this delectable delicacy, mopane worms must first be softened by boiling them in water.

The worms are typically pan-fried with tomatoes, onions, and chilies until crispy after they have softened.

Omagungu is a starter, snack, or food that goes with pap. However, some individuals choose to stew with mopane worms.

They are typically purchased as street food or found in outdoor markets.

Rohack is a Namibian deli dish prepared with raw minced meat (often a game steak), which is mildly smoked and served in our favorite carb- brötchen rolls, along with a ton of pickled gherkins, thinly sliced onion, and heaps of pepper.

It’s cooked fresh multiple times a day, salty, and tasty. Although eating raw beef on a bun may sound strange, we assure you that it is quite tasty. This will become your new favorite dish if you like beef tartar!

Cooked over a sizable open fire in a cast iron, four-legged pot, potjiekos is a classic Afrikaaner dish resembling stew.

If you’re wondering what distinguishes potjiekos from a stew, it’s the lack of stirring.

The ingredients—typically a mixture of potatoes, onions, and supplementary vegetables—are stewed with meat, poultry, or even seafood and cooked for hours over hot embers while you keep adding to the pot.

Rice is typically served with potjiekos, which is best enjoyed with friends.

Barbecues and braais are very common in southern Africa, and Namibia is no exception.

Small, tender chunks of grilled beef are known as kapana, and they are frequently prepared with kapana spice, chile, and salt.

A common side dish served with Kapana is a “salsa” made of chopped tomatoes and onions. The beef’s freshness is enhanced by this cool dip.

The fact that Kapana is created from freshly-butchered beef sets it apart from other grilled meats. It is cooked on the grill and then served.

The greatest kapana in Namibia may be found at Single Quarters in Windhoek, the country’s capital.

You may witness the meat being prepared by skilled chefs. Kapana is also delicious with pap or fat cakes and a cool beverage.

In Namibia, sauerkraut is a common side dish and is very healthy. It tastes great with just about anything and is similar to kimchi (but a little more acidic and less salty).

It is typically served as a side dish with meats like pork, beef, noodles, potatoes, and notably eisbein.

It may also be used as a condiment with foods like sausages and wieners. It can be prepared from scratch or purchased in a jar from the grocery store.

Namibians prepare this dish differently from how you might imagine bangers and mash is typically prepared.

They serve the typical game/beef boerewors (local sausage), which is either grilled over an open flame or fried in a skillet, along with stiff, crumbed porridge made by steaming mealie (corn flour) with a little water, which is served with butter and a tomato-and-onion braai relish.