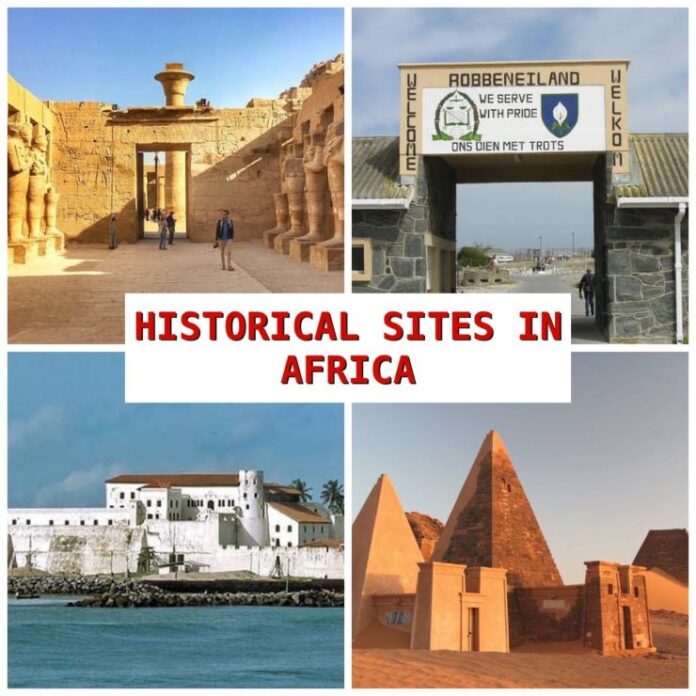 There are some wonderful historical sites on the African continent as proof of its extensive human habitation. Awe-inspiring illustrations of culture, architecture, and evolution can be found here.

A rich collection of ancient sites has been left behind by Africa’s great civilizations over the centuries.

Africa is home to several incredible historical landmarks that are regrettably all too frequently disregarded, including prehistoric pyramids, castles, mosques, and palaces.

We’ve selected ten of the most fascinating historical sites in Africa to serve as inspiration for your upcoming journey.

The Pyramid of Giza is unquestionably one of the most visited historical sites in Africa.

Due of their flawless geometry, intriguing shape, and astonishing size, they have intrigued people for around 4000 years and have led many to wonder how they were created.

These enormous pyramids were actually constructed as tombs for the Egyptian pharaohs.

The Portuguese constructed Elmina Castle in 1482 on what was originally referred to as “the Gold Coast” so they could rule the area and dominate trade.

The castle is a significant historical landmark and a poignant experience because it was later used to hold Africans before they were taken outside as slaves. It is the oldest European building in Sub-Saharan Africa and it should top your list of the historical sites in Africa to visit.

When the Portuguese stormed the island in 1503, they tragically destroyed a large portion of Kilwa, once one of the most powerful towns along the coast of East Africa.

Currently, the island is home to the remnants of palaces, regal structures, and a stunning but decaying mosque, while Kilwa’s well-preserved fort serves as a reminder of its storied history.

You’ll feel like you have the entire island to yourself because tourists don’t swarm here.

The Great Zimbabwe complex of enormous ruins, which were constructed between the eleventh and fourteenth centuries and are the largest in Sub-Saharan Africa, is unquestionably worth a visit.

The city’s enormous walls, towers, and buildings display some lovely architecture, and in its heyday it served as the political, religious, and economic center of a sizable empire.

Another one of the continent’s undiscovered beauties is Great Zimbabwe, which is currently a UNESCO World Heritage Site.

The Amphitheater of El Jem, which the Romans constructed around 238 AD, is remarkably well-preserved and resembles Rome’s Colosseum in many ways.

The amphitheater once served as a venue for gladiator battles and other public shows, but more recently, it has appeared in movies like “Gladiator” and “Monty Python’s Life of Brian.”

Go to El Jem at either dawn or dusk to take some captivating pictures!

Despite not being on many people’s lists of “must-visit places,” Sudan is home to some of the friendliest people in the world and has more pyramids than its well-known northern neighbor.

The ancient pyramids of Meroe, which were once a part of a vibrant civilization, are among Sudan’s most spectacular sights, but due to their distant location in the Sahara, they hardly ever see tourists.

The UNESCO World Heritage Site is a remarkable location with more than 200 pyramids!

One of the most significant historical locations on the continent is Robben Island, which is close off the coast of Cape Town and was Nelson Mandela’s jail for eighteen years.

It is an emotional and eye-opening experience, but one that is important, to see the little cells of the prison that housed political prisoners during apartheid.

Without Egypt, no list of amazing historical places in Africa will ever be complete. As the nation is dotted with magnificent structures, statues, and pyramids that date back thousands of years.

You can tour magnificent temples and stone tombs at Luxor, one of the most well-known archaeological sites on Earth, as well as enjoy some breathtaking Nile vistas.

The Valley of the Kings, which has an astounding number of rock tombs that formerly housed pharaohs’ corpses and their priceless valuables, is without a doubt the centerpiece.

The “New Jerusalem,” which was constructed between the seventh and twelfth centuries, is full of winding tunnels, ornate architecture, and regal courtyards.

Due to the fact that the churches are still in operation, you’ll see plenty of pilgrims wearing white robes.

This is not only one of the historical sites in Africa but also in the world.

The vibrant Ile de Goree, located not far from Dakar, has a sordid past: for almost three centuries, the French held Africans here before sending them abroad to live as slaves.

It is only until you see the dreary dungeons and iron shackles that you start to comprehend the island’s tragic history.

The island is now full with vibrantly colored colonial buildings, and there is a laid-back vibe about it.