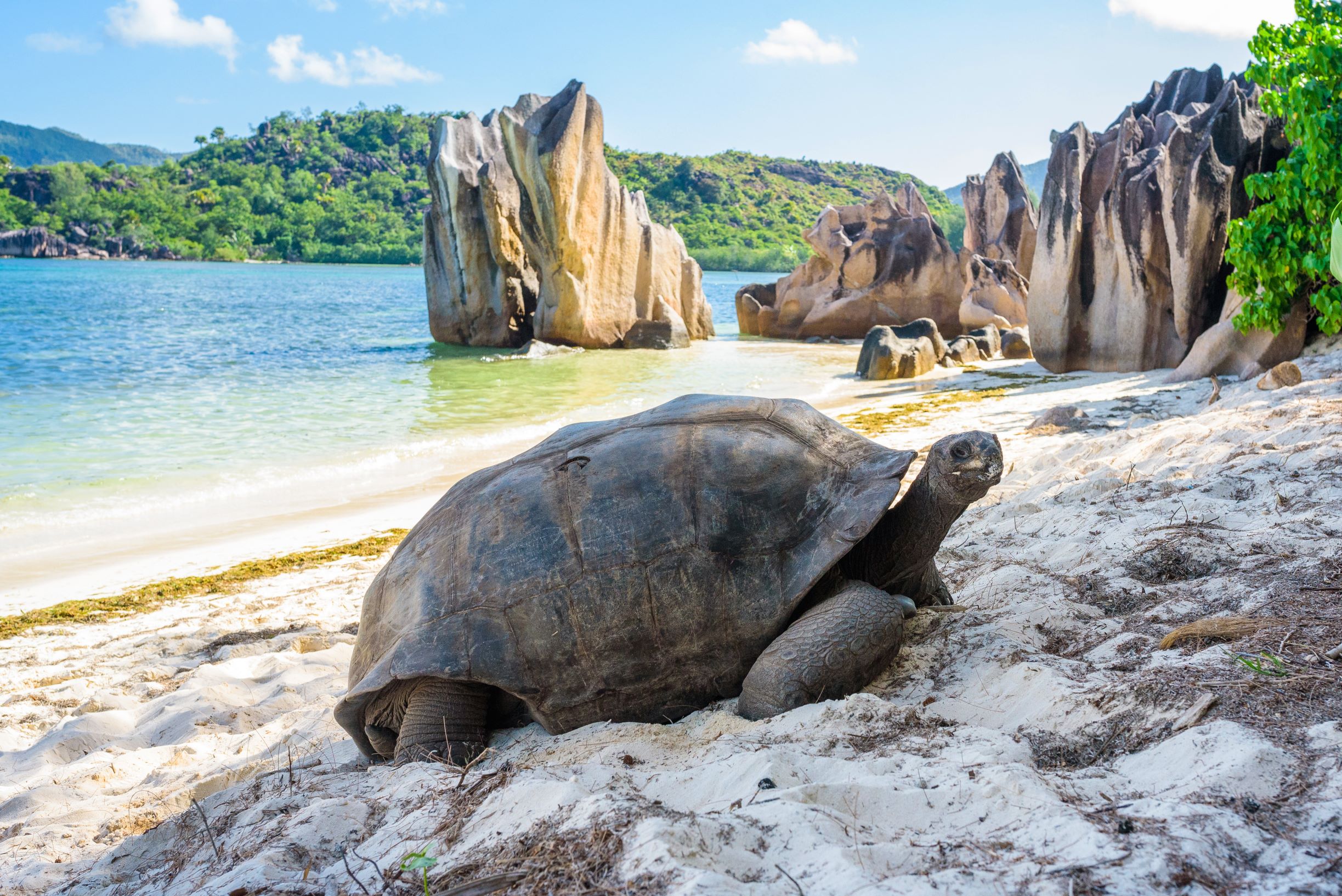 Seychelles is the father of all the amazing places that anyone wants to visit in Africa. One of the most beautiful places you will ever see on earth the blue water and sandy beaches pull you in. It is no surprise that it is one of the topmost honeymoon getaway spots.

Seychelles is one of the closest things to heaven on earth. This beautiful country marked with deep blue waters and white sandy beaches is a hot getaway spot. It has 115 islands and with a population of less than 100,000 people in the entire country. It is country with the least population in Africa.

This beautiful country used to be the home to crocodiles. Seychelles has no indigenous people. The Moyenne is haunted’, say the locals. This make a visit to Moyenne more fascinating for tourists. This treasured landmark has over 99% water and has two different sites designated as UNESCO World Heritage sites.

Seven of the most striking landmarks in Seychelles are in no particular order:

The Clock Tower is called the Victoria’s Clock Tower. What an exotic landmark, also known as the Lorloz. It is the most photographed of all the landmarks in Seychelles.

It is located on the junction of Independence Avenue and Francis Rachel Street, Victoria, Mahé, Seychelles, SC, Africa. The Landmark, Clock Tower, is the hub of the town. One fascinating fact is that the historial treasure is a replica of the “Little Ben” that is found in Vauxhall Bridge Road in London. In recent times, the clock was restored to full working order. This clock tower was only recently repaired by the company which manufactured it. The chiming mechanism was defective from the moment it arrived in Victoria in 1903. The Clock Tower is open daily and admission is free.

The old Courthouse is located across from the UK High Commission and close to the National History Museum and the Clock Tower.

The Supreme Court or Old Courthouse is located on the Corner of Francis Rachel Street/Independence Avenue, Victoria, Mahé, Seychelles, SC, Africa. This historical building is hard to miss with its traditional creole and a most impressive exterior.

There are so many other colonial buildings along the Francis Rachel Street oppose Albert Street. This is part of the character of the Victoria in Seychelles. This site is open daily and admission is free.

The State House is one of Victoria’s best-known colonial buildings and it was built in 1910. It is located in Victoria, Mahé Seychelles, SC, Africa. Within the grounds of the State House lies the grave of Jean Baptiste Queau de Quincy, who was an 18th century governor. He made history by surrendering Seychelles to a passing British ship without a fight.

The President of Seychelles seat is a whitewashed State House with a long balcony. It is surrounded by established tropical landscaped gardens. This site is open daily and can be viewed from the exterior.

The Bicentennial Monument is called ‘Twa Zwazo’, which is ‘Three Birds’ in English by the islanders of Mahé. Bicentennial Monument is located on the 5th June Avenue/Independence Avenue, Victoria, Mahé. This is one of the important landmarks in Seychelles. It has three wings and is located at the junction of Independence Avenue and 5th June Avenue.

One of the sites of note that you should visit in Seychelles is the Hindu temple, Arul Mihu Namasakthi Vinayagar. This is a new addition when compared to other sites in Seychelles. This historial landmark was built in 1992 and has a backdrop of tree green hills, and named after the Hindu god of prosperity and safety. It hold a position in the centre of Victoria and comes with a colorful ornate tower. You can find it on Quincy Street, Victoria, Mahé Seychelles. It is open daily between the hours of 6am and noon, and between the hours of 5pm and 9pm. Admission is free.

St. Paul’s Cathedral is a replacement of the original church that stood in that place until a cyclone destroyed it in the middle of the 19th century. After beginning the maintenance, the structural and cost problems necessitated a rebuilding of the cathedral. The Cathedral’s founders built it from scratch in 2001. They marked the finishing with a huge consecration ceremony.

This landmark has simple architecture. It has a bright white façade with ornate towers and has the obligatory tropical palm tree or two. It is located on the Olivier Maradan Street, Victoria, Mahé, Seychelles. The St Paul’s cathedral is open daily for the celebration of mass.

Venn’s Town, the Mission Lodge, is found on the island of Mahé. A Missionary Society built it in the 19th century. Black slaves were educated first in the Mission Lodge. After they got their freedom, they came to the Mission Lodge to be educated. You can see the ruins of the original lodge today. Tourists can enjoy some amazing views of the mountains and the sea when standing of the special lodge vantage point.

The Mission Lodge is open daily and admission is free.

This impressive piece of architecture is a National Heritage landmark. On the island of Silhouette, coconut trees set off the Dauban Mausoleum. The wealthy Daubans, a high-status family lived on the island were responsible for building the historical landmark. The six giant stone columns and ornate portico that mark the Greek-inspired architecture of the Dauban Mausoleum are a historical treasure to the island of Seychelles

The Dauban Mausoleum is open daily and admission is free.

Seychelles built the University of Seychelles in 2007. The president made a decree to necessitate the building. The University opened in September 2009. Its location is in Mahé.

The university has two campuses, one at the Anse Royale and another at the Mont Fleuri. There are not many students but it is slowly increasing. A visit to the university will be interesting for tourists and citizens.

As the university gains more popularity, the patronage will increase gradually and begin attracting international students. The university is open daily and admission is free.

Also read: 7 Amazing Places to Visit When in Namibia