Namibia, 5 fun facts you should know 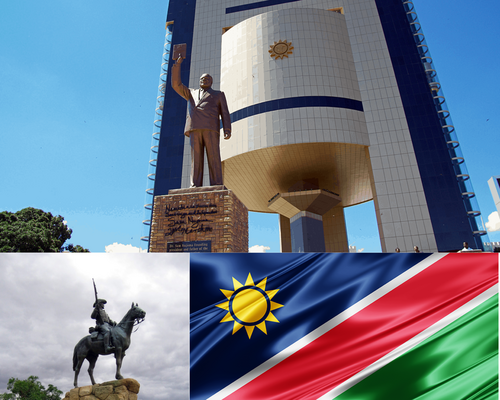 Namibia officially the Republic of Namibia is a country in Southern Africa. Its western border is the Atlantic Ocean. It shares land borders with Zambia and Angola to the north, Botswana to the east, and South Africa to the south and east. The nation gained independence from South Africa on 21 March 1990, following the Namibian War of Independence. Its capital and largest city is Windhoek.

Namibia is a member state of the United Nations (UN), the Southern African Development Community (SADC), the African Union (AU), and the Commonwealth of Nations.

One interesting to note is that Namibia is the driest country in sub-Saharan Africa, it has been inhabited since prehistoric times by the San, Damara, and Nama people.

It has a population of 2.55 million people and operates a stable multi-party parliamentary democracy. Agriculture, tourism, and the mining industry – including mining for gem diamonds, uranium, gold, silver, and base metals – form the basis of its economy, while the manufacturing sector is comparatively small.

Below are 5 interesting things that you should know about the country.

Fact 1: Namibia has one of the largest concentrations of rock art in Africa

The first known inhabitants of Namibia are the San (Bushmen) who belong to the Khoesan people. These hunter-gatherers – like the Ju/’Hoansi, Kxoe, and the Kung – have traveled across the vast plains of Southern Africa for thousands of years until migrants armed with arms looking for new land to graze their animals and plant their food, driving them further and further east into the Kalahari Desert.

The San have resided in Namibia for more than 6,000 years, and there is more than enough rock art to confirm this.

Fact 2: It has the largest population of free-roaming cheetahs in the world

The number of free-roaming cheetahs fluctuates between 2,500 and 3,000. A visit to the Cheetah Conservation Fund is one of the best ways to see them. You’ll be even more likely to hear them, as they’re known for the distinct chirping sound they make.

Fact 3: Namibia has some of the highest sand dunes in the world

The tallest dune in the Sossusvlei region is Big Daddy. Between Sossusvlei and Deadvlei lies this huge dune, which dwarfs the other dunes at 325 meters. Take a lot of water and trek to the summit of Big Daddy, where you can gaze down on Deadvlei, for maximum bragging rights.

Climbing Big Daddy and visiting the Deadvlei is one of the most popular experiences that Namibia is famous for. At 325 meters, Big Daddy is the tallest dune in the Sossusvlei area, although not the highest in the Namib Desert. In reality, Dune 7, which is 388 meters long, has received this honor. Dune 7 gets its name from the fact that it is the 7th dune on the Tsauchab River.

Fact 4: Namibia is home to the world’s oldest desert

The Namib Desert, the world’s oldest desert, has been around for at least 55 million years, devoid of surface water but bisected by many dry riverbeds. The Namib Desert is one of many stunning experiences that Namibia is known for.

A few ungulates, such as Hartmann’s zebras, live in these vegetated riverbeds. An interesting fact about Namibia is that the thick fogs are common along the coast, and they are the desert’s lifeblood, providing enough moisture for a variety of interesting, well-adapted animal species to thrive.

Most of the pieces fell just southeast of Gibeon. To date, some 120 specimens with a weight of almost 25 tons have been recorded. In fact in Namibia, an unknown number has been collected but never recorded.