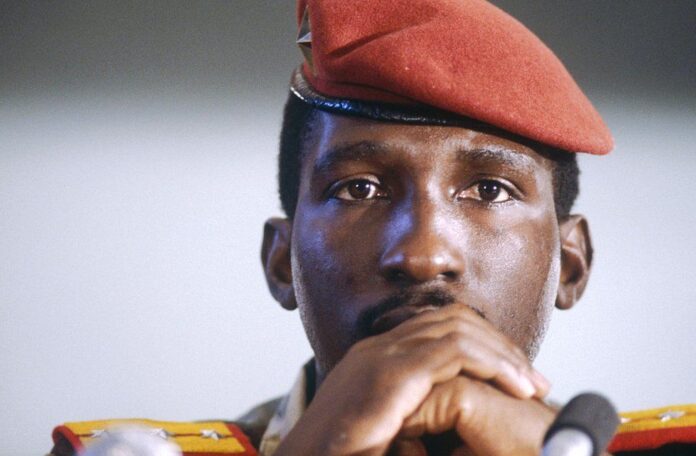 Thomas Sankara (21 December 1949 – 15 October 1987) was born in Yako, French Upper Volta, as the third of ten children to Joseph and Marguerite Sankara. He was a Burkinabé military officer, Marxist revolutionary, and pan-Africanist, he was the President of Burkina Faso from his coup in 1983 to 1987 when he was deposed and killed. Supporters regard him as ‘Africa’s Che Guevara’, a charismatic and iconic figure of revolution.

Sankara attended primary school at Bobo-Dioulasso. He was studious in his education where he excelled in mathematics and French. He went to church often and impressed with his energy and eagerness to learn, some of the priests encouraged Thomas to go on to seminary school.

After basic military training in secondary school in 1966, Sankara began his military career at the age of 19 and a year later was sent to Madagascar for officer training at Antsirabe where he witnessed popular uprisings in 1971 and 1972 against the government of Philibert Tsiranana and first read the works of Karl Marx and Vladimir Lenin, profoundly influencing his political views for the rest of his life.

Returning to Upper Volta in 1972, he fought in a border war between Upper Volta and Mali by 1974. He earned fame for his performance in the conflict, but years later would renounce the fighting as ‘useless and unjust’, a reflection of his growing political consciousness. He also became a popular figure in the capital of Ouagadougou.

Sankara was appointed Minister of Information in Saye Zerbo’s military government in September 1981. Sankara differentiated himself from other government officials in many ways such as biking to work everyday, instead of driving in a car. While his predecessors would censor journalists and newspapers, Sankara encouraged investigative journalism and allowed the media to print whatever it found. After another coup (7 November 1982) brought to power Major-Doctor Jean-Baptiste Ouédraogo, Sankara became Prime Minister in January 1983 but he was dismissed.

A coup d’état organized by Blaise Compaoré made Sankara President on 4 August 1983 at the age of 33. The coup d’état was supported by Libya, which was at the time on the verge of war with France in Chad.. Sankara saw himself as a revolutionary and was inspired by the examples of Cuba’s Fidel Castro and Che Guevara and Ghana’s military leader Jerry Rawlings.  As President, he promoted the ‘Democratic and Popular Revolution’ (Révolution démocratique et populaire, or RDP). His policy was oriented toward fighting corruption and promoting reforestation.

HIS DEED AS A LEADER

Sankara’s first priorities after taking office were feeding, housing and giving medical care to his people who desperately needed it. Sankara launched a mass vaccination programme in an attempt to eradicate polio, meningitis and measles. From 1983 to 1985, 2 million Burkinabé were vaccinated. Shortly after attaining power, Sankara constructed a system of courts known as the Popular Revolutionary Tribunal. The courts were created originally to try former government officials in a straightforward way so the average Burkinabé could participate in or oversee trials of enemies of the revolution. Sankara’s administration was also the first African government to publicly recognize the AIDS epidemic as a major threat to Africa.

On 15 October 1987, Sankara was killed by an armed group with twelve other officials in a coup d’état organized by his former colleague Blaise Compaoré. When accounting for his overthrow, Compaoré stated that Sankara jeopardized foreign relations with former colonial power France and neighbouring Ivory Coast, and accused his former comrade of plotting to assassinate opponents.

In 1983, Sankara ascended to the presidency of Burkina Faso, after a successful coup d’etat. A year later, he renamed the country Burkina Faso.This means “the land of upright people” in Moré and Dyula; two dominant languages in the country. It was previously known as the Republic of Upper Volta, a colonial name given by French colonists. He also designed the new country flag and composed a new national anthem, Une Seule Nuit.

“Colonialism has pillaged our forests without the least thought of replenishing them for our tomorrows.’’ Sankara said.

Sankara was committed to gender equality. He introduced special literacy classes for women and maternity training in rural areas. Sankara appointed women in leadership positions in his cabinet. He decreed that girls who fell pregnant must remain in school. He outlawed female genital mutilation, and forced marriages. Polgamy was outlawed and windows could inherit their marital estate.

“The revolution cannot triumph without the emancipation of women” -Sankara on International Women’s Day, March 8, 1987.

He made the cheapest car sold in Burkina Faso (Renault 5) the official service car for ministers. First class airline tickets and government chauffeurs were forbidden. He reduced his own salary and that of public servants. They also had to pay one month’s salary to a public project. Sankara famously limited his possessions to a car, four bikes, three guitars, a refrigerator, and a broken freezer.

“The one who feeds you usually imposes his will upon you.” Sankara at the summit of the Organization of African Unity in July 1987. Sankara believed Burkina Faso could sustain itself without foreign aid. He refused aid packages from the International Monetary Fund. Sankara also tried to persuade other African countries to refuse to pay financial debts to their former colonisers. He said the debt goes back to colonialism, and that Africa is not responsible to pay it back.