50 Cent to Produce TV Series Based on Famous Scammer, Hushpuppi 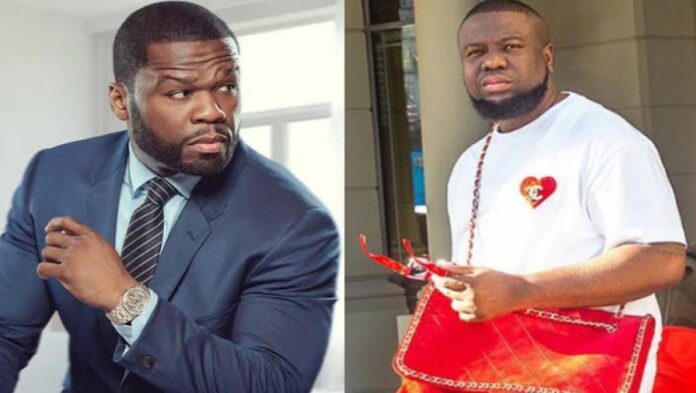 Famous American rapper and actor 50 Cent has announced his plans to produce a TV series based on the life of famous Nigerian scammer Hushpuppi.

50 Cent announced on Wednesday, November 9, 2022 via his Instagram page;

Ramos Abbas, better known by the nickname Hushpuppi, was arrested in Dubai, United Arab Emirates, in June 2020, on charges of defrauding more than 1.9 million people, most of them Americans. Shortly thereafter, he was extradited to the United States for trial.

Also, read; Kenya to Spend $37 million on Helping Congo in its Fight Against Insecurity

A United States District Court in the Central District of California recently sentenced Hushpuppi to 11 years and three months in prison after finding him guilty of laundering money from a school finance scheme, processing commercial email and other fraudulent electronic systems. He is also to pay $1.7 Million To Two Fraud Victims.

50 Cent’s announcement to make a film based on Hushpuppi’s life follows an earlier announcement by EbonyLife and Universal Studios that they would acquire the biopic rights to the Nigerian influencers.

Although it remains quite unclear how these interested parties will work together to come up with an impressive detail about the life and actions of Ray Hushpuppi.

Share
Facebook
Twitter
Pinterest
WhatsApp
Previous article
Kenya to Spend $37 million on Helping Congo in its Fight Against Insecurity
Next article
Davido postpones ‘Are We Africans Yet (A.W.A.Y)’ Atlanta Concert, As He Mourns Death of His 3-year-old Son