Davido postpones ‘Are We Africans Yet (A.W.A.Y)’ Atlanta Concert, As He Mourns Death of His 3-year-old Son 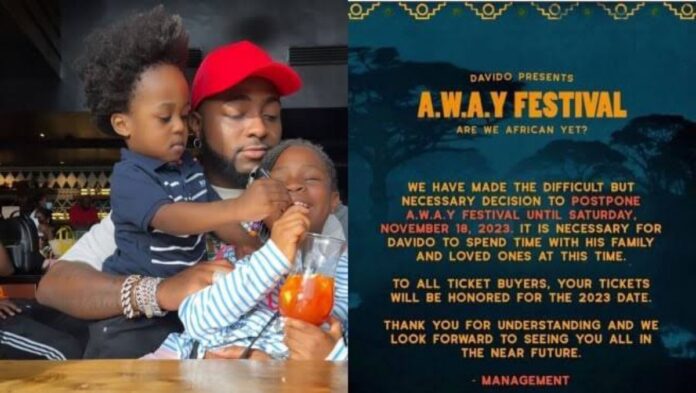 Davido and his team announced the postponement of the Are We Africans Yet (A.W.A.Y) concert following the death of his son late last month.

The singer previously deleted some promotional posts on his Instagram page while mourning the loss of his son.

“We have made the difficult but necessary decision to postpone A.W.A.Y Festival until Saturday, November 18, 2023.

“To all ticket buyers, your tickets will be honored for the 2023 date. We understand that you must be disappointed but we promise to come back with a bigger and better show.

Thank you for understanding and we look forward to seeing you all,” the statement released by the singer’s management reads.

However, the tragic death of his 3-year-old son, Ifeanyi David Adeleke, left him and his crew in mourning, and the show was postponed by a year.

The highly anticipated show, which features Afrobeats giants Mayorkun, Stonebwoy, Pheelz, Lojay, Kizz Daniel and others, will take place on November 18, 2023 as part of the supporting artist group and is part of a social media statement from the organizers.

It’s been painful preparation for the end of 2021 for Davido and his partner Chioma, but also for his fans who were hoping to see the big star perform live during shows this holiday season.

Of course, the Stand Strong singer will take some time to recover from his traumatic loss, and fans are hoping for a quicker recovery than they ever expected.