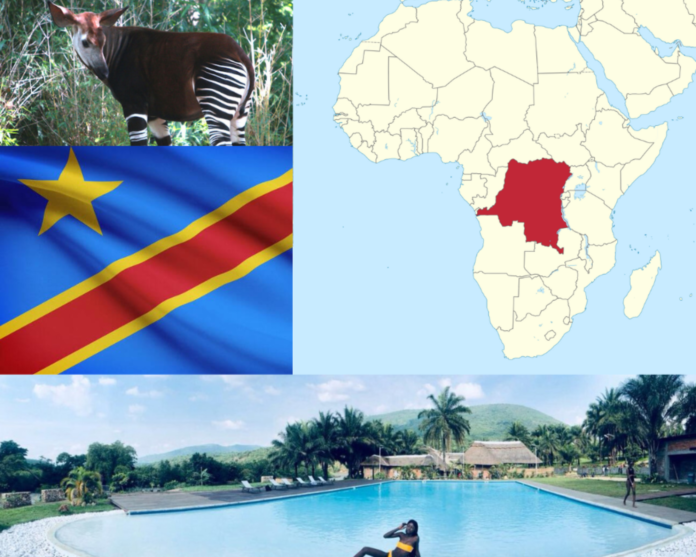 The Democratic Republic of the Congo (informally known as Congo-Kinshasa, DR Congo, the DRC, the DROC, or the Congo, and formerly and also colloquially Zaire) is a country in Central Africa. One very interesting thing that may come off as shocking to you is that Music is the biggest export of this country.

Congo is in fact the second largest country in Africa, having 9 borders: Angola, Burundi, the Central African Republic, the Republic of Congo, Rwanda, South Sudan, Tanzania, Uganda, and Zambia.

Kinshasa it’s capital happens to be the world’s largest french speaking city in the world. The wildlife in Congo is simply phenomenal and there is a popular belief that you can catch the ebola virus just as easily as you can catch a cold; but that’s wrong, asides from the outbreak in 1995 that killed about 200 people, every other outbreak has been contained excellently.

Another surprising thing that many people do not know about Congo D.R. is its unspoken role in World war II. The uranium that was used to manufacture Atomic Bombs was gotten from the Shinkolobwe mine in the Katanga Province of Congo.

The oldest national park in Africa is the Congo’s Virunga National Park. It is home to rare mountain gorillas, lions, and elephants. The park is currently under threat by the UK oil company, Soco, which has begun oil exploration there.

Congo like every other place on earth has beautiful sites to see. There are special places that do not have a duplicate in any other place in the world. Congo being a land-locked country has dynamic sceneries to present to whoever is willing to pay a visit and see for themselves. Next up are 5 places you want to see with your eyes if you ever go to Congo D.R.

The skyline of Goma in the DRC is dominated by Nyiragongo. This unbelievable, 3,000+ meter volcano last erupted in 2011, destroying up to 15% of the surrounding land and leaving over 120,000 homeless. Erupting 34 times in the last 130 years, Nyiragongo is located at the junction where the African tectonic plate is breaking.

The landscape around Goma is striking, with black solidified lava so wide that the place looks like an above-ground coal mine. There is an active lava lake inside the crater which can sometimes be visited. The area has recovered nicely from the last blast and you’ll find plenty of new shops and markets to discover.

Lake Kivu is one of the African Great Lakes.  It lies on the border between the Democratic Republic of the Congo and Rwanda and is in the Albertine Rift, the western branch of the East African Rift. Lake Kivu empties into the Ruzizi River, which flows southwards into Lake Tanganyika. Lake Kivu is a freshwater lake and, along with Cameroonian Lake Nyos and Lake Monoun, is one of three that are known to undergo limnic eruptions.

Around the lake, geologists found evidence of massive local extinctions about every thousand years, presumably caused by outgassing events.

Salonga is both the DRC and Africa’s largest tropical rainforest.  In this UNESCO World Heritage Site, you’ll find several endangered species including the Congo peacock, dwarf chimpanzees, forest elephants, and the slender-snouted crocodile. The park is quite isolated and you must take a boat to reach it.  This vital ecosystem is so large that it plays an important role in climate regulation for the entire country.

The Okapi Wildlife Reserve occupies about one-fifth of the Ituri forest in the north-east of the Democratic Republic of the Congo. The Congo river basin, of which the reserve and forest are a part, is one of the largest drainage systems in Africa. The reserve contains threatened species of primates and birds and about 5,000 of the estimated 30,000 okapi surviving in the wild. It also has some dramatic scenery, including waterfalls on the Ituri and Epulu rivers. The reserve is inhabited by traditional nomadic pygmy Mbuti and Efe hunters.

Pointe Noire after Brazzaville is the next largest city in Congo. It can safely be called the financial hub of Congo too, as it is the home to oil industries. It is also the port city of Congo. Pointe Noire, promises wildlife and beaches at the same time. Cote Sauvage is considered the best beach in Pointe Noire.

Virunga is the oldest national park in Africa and one of the many UNESCO World heritage sites in the Democratic Republic of Congo. The park was established in 1925 and is located in the eastern part of the country. Virunga was at first named Albert National Park and by then included the Volcanoes National Park in Rwanda and parts of Mgahinga Gorilla Park in Uganda. Virunga is the most visited national park in the Democratic Republic of Congo.

What stands out about it apart from volcanoes and mountain gorillas is the remarkable biodiversity. Virunga is home to lions, leopards, chimpanzees, elephants, hippopotamus, and rare creatures like the okapi. Gorilla trekking in Virunga National Park is the most popular activity followed closely by hiking Mount Nyiragongo.