Akan Drum: The Oldest African Artifact in The British Museum 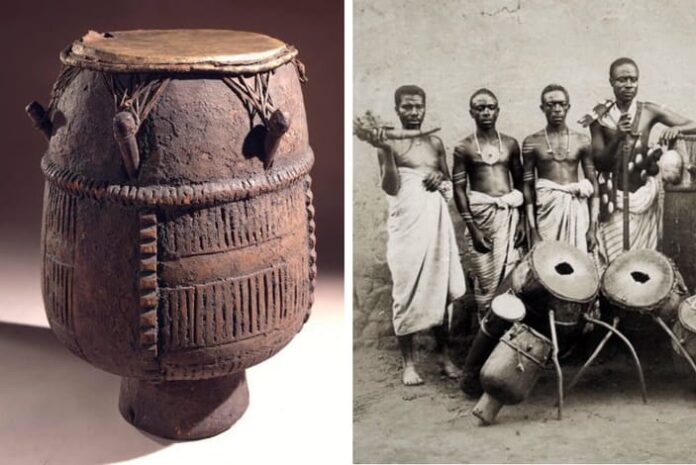 The Akan drum is one of the numerous artifacts that were taken from Africa to the British Museum.

In fact, the Akan drum is one of the oldest existing African artifacts in the museum. Just as the name implies, the Akan drum originates from the Akan region in Ghana where it was usually played during religious celebrations and social ceremonies.

The Fante, Asante, and Akuapem are part of the Ghanaian ethnic group known as Akan.
The drum is made of carved wood with animal leather cover all over it and it is thought to date back to the early eighteenth century.

In the olden days, the Akan drum was used to communicate across villages. Skilled drummers were known to mimic the accents, punctuation, and tones of the Akan language while using the drum to pass a message across to people.

Research shows that the drum was purchased by Sir Hans Sloane, who happened to be the founder of the British Museum that started in 1753.

The Akan Drum in America

The Akan drum is believed to have been transported to Virginia on a slave ship, but not by an African slave because, at that time, these slaves were not allowed to take personal belongings with them and talk more of taking a drum.

History shows that it took roughly about six weeks or even more to take the slaves from Africa to North America.

While traveling, the slaves were mostly chained and were not allowed to view outside. Some of them got really ill while others tried to commit suicide.

Research also states that the Akan drum was used to force the Africans to exercise. The aim of this was to preserve them for slave labor, and that was probably how the Akan drum may have reached Virginia.

Plus, there are claims that the original skin of the drum was replaced in North America.

The Akan Drum in Britain

Reverend Mr. Clerk most likely collected the Akan drum between 1730 and 1745 on behalf of Sir Hans Sloane, who founded the British Museum.

Sloane’s collection, which included slave tools and other artifacts like the Akan drum consequently served as the basis for the British Museum.

The British Museum’s curators came to the conclusion that the drum was most likely constructed in West Africa rather than by Native Americans.

The Drum was made of wood that was grown in Akan, Ghana, according to research done in the 1970s using knowledge from Kew Gardens, a botanic garden in London that is home to one of the “biggest and most diversified botanical and mycological collections in the world.”

In 2020, former deputy chair of the Museum trustees Bonnie Greer chose the Akan Drum to be included in the British Museum’s “Objects of Crisis” series on YouTube.

The series aimed to draw attention to pieces in the British Museum’s collection that demonstrate the significant difficulties that ancient people faced.