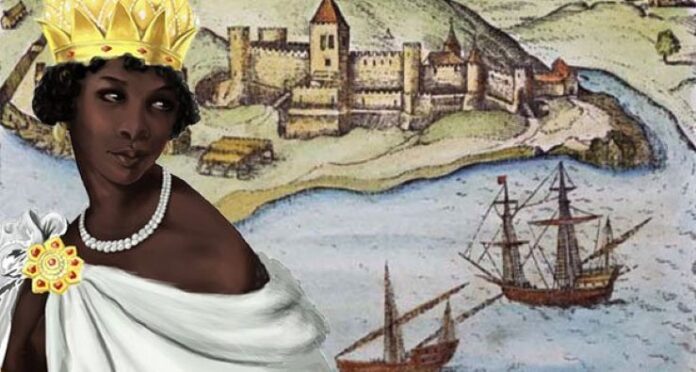 There are disagreements over Queen Nzinga Mbande past. Matamba’s missionaries and colonial historians from Portugal links her conversion to Catholicism and involvement in the slave trade. Her anti-colonial activities and her protracted fight against colonial domination seems to be the main focus of Angolan nationalist historians.

What is certain, though, is that Queen Nzinga Mbande ascent to power as a woman of her era was nothing short of revolutionary, and that those who would later fight for Angolan independence would find inspiration in her exploits as a warrior, diplomat, and country builder.

For more than two centuries after her death, the Kingdom she established served as a haven for fugitive slaves and a barrier against European invasion.

She serves as a major source of inspiration for contemporary African feminists because of her acts as a woman challenging both male and colonial dominance.

The state of Angola later took its name from the Ngola title. Nzinga Mbande, the daughter of Ngola Kia Samba and Guenguela Cakomb belonged to the royal dynasty.

After her father, her brother succeeded him as the Ngola Mbandi and ruled Ndongo from 1618 to 1624.

The Ngola who oversaw the Kingdom of Ndongo was chosen via an election procedure in which many members of the dynasty were up for consideration.

Instead of coming from a position of absolute power, the Kingship of Ngola was negotiated through alliances and interpersonal connections. A new Ngola was expected to redistribute riches to his or her followers as a form of recompense after being selected from one of the leading noble families or lineages.

A woman being elected to the office of Ngola was extremely uncommon, and Nzinga’s ascent to power was extraordinary and the result of cunning political scheming.

Nzinga Mbande was born when the Mbundu people were in conflict. The Portuguese established their first outpost in what later became the province of Angola in 1575.

The establishment of this stronghold on the island of Luanda served as the catalyst for a protracted battle between the Ndongo and the Portuguese.

Portugal engaged in ongoing hostilities with the Kingdom of Ndongo beginning in the 1580s in an effort to expand its conquests and increase its slave population. The Portuguese formed an alliance with the Imbangala people in the early 1600s.

The Imbangala were essentially armed gangs of individuals who traveled throughout central Africa and were renowned for their guerilla warfare and fighting prowess. The combined assault of the Imbangala and the Portuguese in 1618 nearly brought down the entire Kingdom and resulted in several significant losses for the Ndongo.

Nzinga’s early life is not well known, although her brother, the Ngola Mbandi, sent her to negotiate a peace deal with the Portuguese in 1622.

According to the legend, Nzinga Mbande was supposed to sit on a mat on the floor when she entered the chamber to negotiate with the Portuguese Governor, who was seated in a chair.

She had a servant kneel down behind her so that she could bargain on an equal footing because she didn’t want to be sat higher than her adversary. She remained in Luanda for months, talking with the Portuguese about potential peace treaties.

In order to strengthen her negotiating position, she consented to being baptized as a Catholic and adopted the name Ana de Sousa.

Although Nzinga was able to arrange a peace deal with the Portuguese, they violated it almost immediately after she left Luanda.

According to some historians, her encounter with the Portuguese helped her later on in her rise to power because it made her a serious contender for the position of Ngola.

The Ngola Mbandi, Nzinga’s brother, died in mysterious circumstances in 1624. Over the years, tension had grown in the relationship between Nzinga and Mbandi.

First of all, because they had separate moms, they weren’t really siblings, and as the Mbundu people trace their ancestry through women rather than men (matrilineal), they weren’t related.

Further lowering Nzinga’s standing in the eyes of other royals at the time was the rumor that her mother had been a slave. Additionally, it is thought that Mbandi killed Njinga’s son before taking the kingdom in 1618.

Nzinga was chosen, despite fierce opposition from several noble lineages, first to serve as her nephew’s regent when her brother passed away and then as Ngola after her nephew’s untimely death.

She afterwards adopted the name and position of Ngola Njinga Mbandi. She negotiated a second treaty with the Portuguese in 1624, after having effectively assumed the role of Queen of the Kingdom of Ndongo, granting the Portuguese the right to trade (including slavery) and missionary work in exchange for respecting Ndongo’s territorial integrity and destroying a Portuguese fort that was located there.

However, the agreement rapidly broke down. While the Portuguese Governor failed to carry out his promise to take down the fortification on Ndongo territory, Queen Nzinga harbored escaped slaves in her country, violating his obligations under the contract.

Nzinga must have had doubts about the Portuguese intended to uphold their commitments with the second contract given how swiftly they had breached their previous deal.

The Portuguese started supporting other claimants to the throne and inciting them to rebel against Nzinga in order to obtain influence over the internal politics of the Kingdom of Ndongo. She would need to strengthen her military in order to combat both the Portuguese and her domestic adversaries.

She requested assistance from one of the local Imbangala war bands in order to do this. The majority of Imbangala moved east and established themselves under the name of Kasanje after the Portuguese-Imbangala partnership ended in 1619.

However, a sizable Imbangala community known as the Kanza existed south of the Kwanza River.

She gained leadership of the group through a symbolic wedding and a lot of political maneuvering, after which she instilled Imbangala martial arts training among her Mbundu supporters.

In addition to giving her a strong army, this also afforded her a wonderful escape route because she could now travel south of Kwanza, where the Portuguese would not dare to pursue.

Nzinga established a camp on the Kindonga Islands, which served as her permanent retreat location in the event that the Portuguese attacked her.

Queen Nzinga personally led numerous raids against the Portuguese, who were encroaching on the Ndongo territory, between 1626 and 1629. She also engaged in combat with Ngola Hari a Kiluanje, the pretend King of Ndongo, who was controlled by Portugal.

Ngola Hari a Kiluanje passed away in the late 1620s, but for the next 25 years, his son ruled Ndongo as a puppet of the Portuguese. By 1629, she had lost the support of her Imbangala allies. Unable to defeat the Portuguese, she fled to the Kingdom of Matamba in the east.

The Kingdom of Matamba, which had been severely weakened by Kasanje raids, was subdued by the remaining soldiers she had, and in 1631 the two Kingdoms of Matamba and Ndongo were united (although she effectively only held control over Matamba at this point).

She had made the Kingdom of Matamba one of the largest in the area by the 1640s by enlarging its borders. Midway through the 1630s, Nzinga overcame the Ngola Hari and the Kiluanje and stopped any further inland Portuguese slaving assaults.

It should be emphasized that, like the most of the region’s successful rulers at the time, Queen Nzinga benefited financially from selling her captured opponents as slaves.

Events throughout Europe during the 1640s supported her fight against the Portuguese. During the Protestant Reformation that was taking place in Europe, the Dutch and Portuguese were at war, and in 1641, a fleet of Dutch ships attacked and captured Luanda.

In order to drive the Portuguese out of their coastal fortifications, an alliance was then established between the Kingdom of Kongo, Njinga’s Kingdom of Ndongo/Matamba, and the Dutch.

The Portuguese colonialists and the Afro-Dutch alliance fought each other for seven years, and by 1647, the Portuguese presence had all but vanished. However, the situation changed in 1648 when a Brazilian armada came to the aid of the Portuguese army besieged in the citadel of Massangano.

Following this, the Dutch and Portuguese immediately reached a truce. Queen Nzinga withdrew back to Matamba since she was unable to continue the military effort on her own.

She started negotiating for peace with the Portuguese in 1654, and they came to an agreement in 1656.

To the dismay of their king, the Portuguese recognized Queen Nzinga as the ruler of both Matamba and Ndongo; in exchange, she opened her Kingdom to Portuguese sailors and slave dealers and ceded control of the trade route from Matamba to the sea.

She reaffirmed her Catholicism in order to secure the peace deal. The treaty was to uphold her nation’s and state’s sovereignty, but there were also significant compromises, like an annual tribute of slaves to be given to the Portuguese.

Later on, she personally led her soldiers in the majority of the engagements they fought throughout the 30-year struggle with the Portuguese.

At the end of her life, Queen Nzinga embraced Catholicism more fervently. According to some academics, this was done strategically to solidify Portuguese support for her authority and quell any domestic opposition.

Some historians also claimed she married multiple men throughout the 1640s, some of whom she did so concurrently.

According to some researchers, the adoption of concubines was done to give the woman more legitimacy in the eyes of the other aristocratic families by adopting stereotypically masculine behaviors.

In any case, she abandoned her concubines after reaffirming her Catholic faith in 1656 and got married to just one man.

Her adherents were also instructed to abandon their Imbangala customs after the peace deal with Portugal, which meant that people would live in villages rather than traveling in camps and that women would be permitted to have children and raise them.

Queen Nzinga passed away in 1663 at the age of 81. She was still a striking figure and still possessed her martial prowess, according to eyewitnesses who had saw her lead military parades in 1662.

The latter years of her life were devoted removing her Imbangala associates from the center of power and laying the groundwork for her successor.

She had solidified the notion that a woman could rule the Mbundu people at the time of her death. Her sister Barbara, who ruled until 1666, succeeded her.

The Kingdom of Ndongo and Matamba had four more female monarchs between the years 1666 and 1767 following Queen Barbara.

Few nations in the world have had a woman as their monarch for as long as Ndongo-Matamba did following Queen Nzinga.

While the Portuguese invaded the Ndongo territories in 1671, the Matamba region of the Kingdom remained independent until the early 1900s.