8 Things To Do In Rwanda 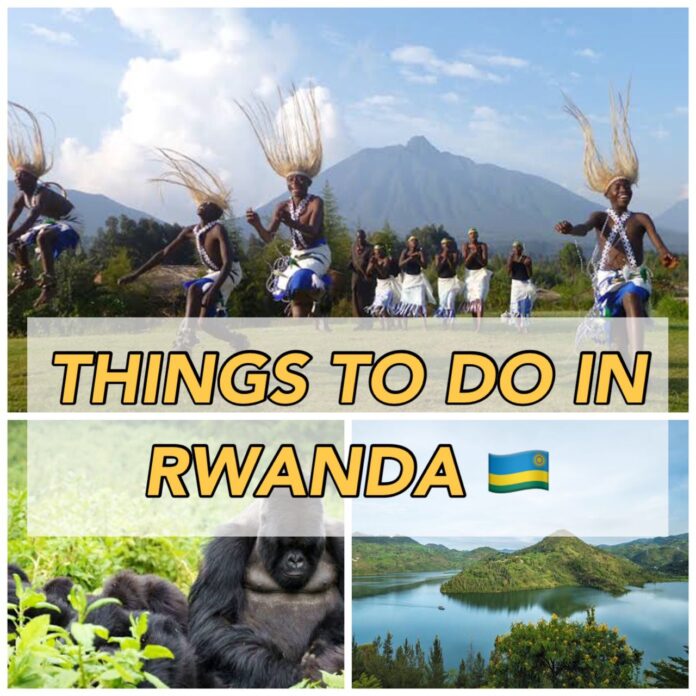 Kigali was chosen to serve as the nation’s capital after Rwanda declared its independence from Belgium in 1962 because it is roughly in the country’s geographic center and serves as a great starting point for touring Rwanda’s top tourist destinations.

Plan to stay in the city for few day? Rather than just passing through, we will show you 8 things to do in Rwanda that can help you have a nice time around.

Although the 1994 Rwandan Genocide left Kigali in ruins, it has since been rebuilt and is now one of the cleanest and safest cities in Africa.

Skyscrapers and start-up businesses offer a startling contrast to the verdant hillsides in the area, and the area’s cosmopolitan appeal is furthered by its modern art galleries, coffee shops, and restaurants.

So, if you ever get yourself caught up in the beautiful city of Rwanda, here are 8 things to do in Rwanda to create memories.

1. Get up close and personal with a mountain gorilla

Who wouldn’t love the idea of watching gorillas go about their day activities. This is our number one on things to do in Rwanda.

One of the most extraordinary and unforgettable travel experience one may have in a lifetime is tracking a mountain gorilla through the strange intimacy of a rainforest filled with the cries of colorful birds and the chatter of the rare golden monkey.

The headquarters of Volcanoes National Park is where gorilla trekking takes place, and there you are assigned to one of the twelve habituated gorilla groups.

Each gorilla group is only permitted eight visitors per day, and in order to prevent the spread of human diseases, tourists are advised to keep their distance of 7 meters (22 feet) from the gorillas.

Since the excursions traverse through dense jungle vegetation up steep, frequently muddy hills, tracking typically takes between one and ten hours.

It is crucial to reserve gorilla permits as soon as possible because there is a daily cap of 80 permits, and during high season, these sell out well in advance.

Make time to see Musanze Cave if you’re visiting Volcanoes National Park. The cave, which extends for slightly over a mile beneath the basaltic lava rock of the park’s volcanoes, is accessible via a network of walkways and stairs.

The tours are approximately 2.5 hours, and during that time your guide will discuss the intriguing history of the cave as a haven for locals during times of persecution.

The cave’s roof has cracked in several areas, enabling shafts of colored light to shine inside. The astounding number of roosting bats in Musanze is one of the area’s key draws. Tickets can be purchased at Musanze’s tourist information office.

3. Be sure to visit the Kigali genocide memorial

Did you really visit Rwanda if you don’t visit the genocide memorial site? The 1994 Rwandan Genocide, the most savage and deadly killing spree in human history, was orchestrated by despicable political leaders of the time.

It is remembered at the Kigali Genocide Memorial. More than a million people – sons and daughters of Rwanda – were killed over the period of roughly 100 days.

After President Habyarimana was killed when his jet was shot down, the nation spiraled out of control, with the media encouraging citizens to rape, maim, and kill their neighbors, friends, and family members.

The world community had the ability to step in, but they chose not to. The Rwandan people now strongly believe in peace, reconciliation, and the eradication of all types of discrimination, whether they be racial, regional, or otherwise. The testimonies at the Genocide Memorial in Kigali are quite moving.

This is like one of the most interesting and informative things to do in Rwanda because you also get to learn more about history.

After the River Kagera, Akagera National Park is situated in northeastern Rwanda, close to the Tanzanian border, about two hours drive from Kigali, the country’s capital.

The park was established in 1934 by the Belgian government, which was occupying Rwanda at the time. Its breathtaking landscape is dominated by savannah, papyrus swamps, little lakes, and rolling hills.

After years of healing from the 1994 Genocide in Rwanda, Akagera is once again a secure haven for the continent’s Big Five – the lion, leopard, rhinoceros, elephant, and buffalo – as well as other amazingly diverse fauna.

It’s regarded as one of Rwanda’s top locations for bird watching. Days here are filled with boat safaris on the lakes where there are many hippopotamuses and Nile crocodiles, as well as game drives in pursuit of the Big Five.

5. A journey to Dian Fossey’s monument

American biologist Dian Fossey traveled to Rwanda to research gorillas; her life is shown in the film “Gorillas in the Mist.”

To prevent the extinction of these magnificent animals, she launched a fight against poaching. However, she was ultimately brutally murdered in her cabin, a shocking incident for the entire world.

Although there are many theories about how she was killed, none of them have been proven. Dian Fossey built this base in the saddle region between Mt. Visoke and Mt. Karisimbi of Volcanoes National Park (from which the name Karisoke is derived).

Although Hotel des Mille Collines, sometimes known as “Hotel Rwanda,” is in a location with such an amazing and moving history that for many travelers visiting Rwanda, it is a must-see.

The Hotel des Mille Collines, built and operated by Belgian airline Sabena in 1973, was regarded for 20 years as the best great hotel in the nation.

The hotel’s European managers were evacuated during the 1994 Genocide, and local employee Paul Rusesabagina took over management. Rusesabagina utilized the building as a shelter for roughly 2,000 Tutsis and moderate Hutus who were escaping the violence.

In order to obtain food and water for the refugees as well as protection, Rusesabagina paid off the troops with cash and booze.

The UN and other international nations put pressure on the Rwandan government forces to safeguard the safety of individuals trapped within due to the hotel’s high profile and Rusesabagina’s public efforts.

This amazing tale later served as the inspiration for the 2004 film “Hotel Rwanda,” albeit the hotel does not actually appear in the film (it was largely shot in South Africa).

You’re not the only one who is startled to learn that Rwanda has a beach. The largest lake in Rwanda, Lake Kivu, which makes up roughly half of its western border, is where the waterfront town of Rubavu (also known as Gisenyi) is situated.

After a day of trekking, relaxing in Rubavu, which is about an hour away from Volcanoes National Park, is a terrific idea.

The lakeshore is lined with affluent colonial homes that are encircled by lush tropical gardens.

Visitors can spend a leisurely day wandering along the palm-tree-lined lakeside promenade, taking in the sunshine on the sandy lakeshore, or swimming vigorously in the cool waters of the lake.

The Congo Nile Trail, which begins at Rubavu and extends for a total distance of 227 kilometers (140 miles), starts there and follows the hazy coastline of the lake all the way to Rusizi, which is close to the Burundian border.

Cycling and trekking enthusiasts can get a glimpse of Rwandan rural life in the stunning scenery between Ruvabu and Rusizi, which is made up of undulating hills, emerald tea plantations, and little fishing settlements. Most tourists rarely get to explore this side of Rwanda.

The last on our list of things to do in Rwanda is a visit to the Ethnographic museum.

The Rwandan Ethnographic Museum is housed in the district of Huye and has one of Africa’s best collections of ethnological and archaeological items.

It is situated about 130 kilometers south of Kigali. In 1989, in recognition of the 25th anniversary of Rwanda’s independence, Belgium gave the museum to the city.

The seven exhibits of the Ethnographic Museum transport visitors to Rwanda before its colonization.

An stunning assortment of woven baskets, traditional clothing made of animal hides and woven grass, spears, arrows, musical instruments from hundreds of years ago, and antiquated farming implements will be on display.

Visitors can see a real royal residence and see how it was built. Live handcraft demonstrations are another feature of the exhibition.