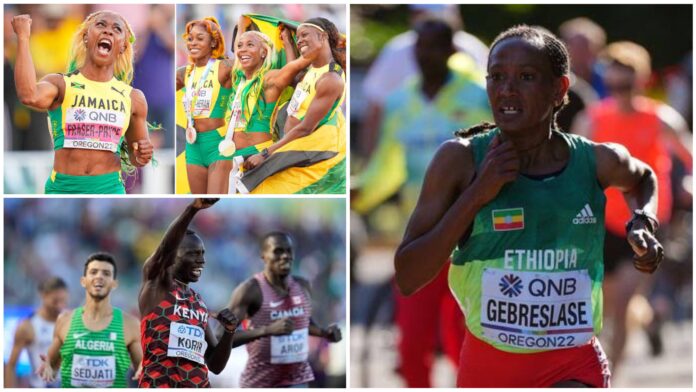 Athletes of African decent have made history during the world athletic championships with Ethiopia, Jamaica, and Kenya topping the list of athletes with the most medals.

The Ethiopian track and field team finished the 2022 IAAF World Championships with an impressive second place in the medal table.

The competition proved quite interesting for black nations, with Ethiopia, Jamaica and Kenya finishing as the top black nations with the most wins and most medals.

More than 1,700 athletes from 179 countries participated in this year’s championship in Oregon, which ended Sunday night.

The United States led the medal count with a total of 33 medals, including 13 gold, 9 silver and 11 bronze. The total is also the highest of any country at a single World Championships in Athletics.

The US leads the medal table after breaking the record for most medals in a single championship, winning a total of 33 medals, including 13 gold.

Jamaica and Kenya finished the World Championships with a total of 10 medals and two gold medals each.

WA also said the record for the number of countries that won gold medals in a championship has been broken, with 29 countries alternating on the top step of the podium, compared to 26 in 2017.

The United States, home to the IAAF World Championships for the first time, also dominated the points total with 328, followed by Jamaica with 111, Ethiopia (106) and Kenya (104).

The USA also won the inaugural team trophy, the first time a champion per team has been officially recognized by the World Athletics.