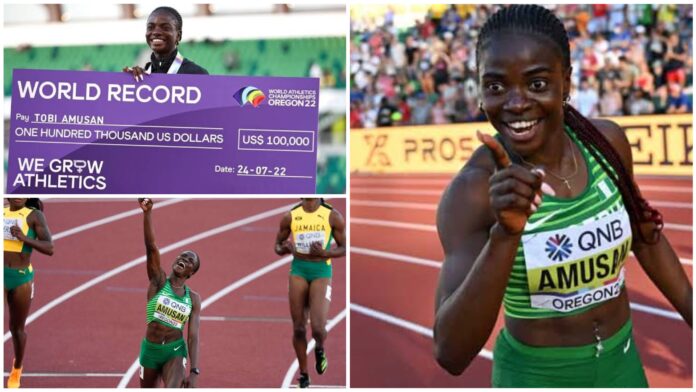 Her performance came 90 minutes after she set a record time of 12.12 seconds in the semifinals, beating American Kendra Harrison’s record of 12.20, who finished second behind Amusan.

Amusan finished the final in 12.06 seconds, which would have broken her new world record, but her record was overturned due to wind speeds exceeding the legal limit.

“The goal was to go out and win this gold medal,” said the 25-year-old.

Recovering from a slightly slower start, she put on a captivating performance to finish ahead of Jamaican silver medalist Britany Anderson.

Amusan broke the game record twice in 2019 in Rabat, Morocco. She ran 12.69 seconds to win her run in the semifinals before running a hundredth of a second faster in the finals to win gold at the African Games.

Next up was the 12.68 seconds, which Alozie ran twice to win a silver medal at the 2000 Olympics in Sydney, Australia, making her the fastest Nigerian woman in the quadrennial event’s history.

Amusan surpassed that at Tokyo 2021 with her 12.60-second performance that earned her a fourth place finish in the event.

The reigning Commonwealth Games champion also made history with the 12.44 seconds that Alozie ran in the 1998 Monaco Diamond League.

The time, which also doubled as an African record at the time, was the fastest by any Nigerian in the event’s history until Amusan ran 12.42 seconds to complete a triple in September 2021.

Former world record holder, American Kendra Harrison, who has held the record since 2016, was disqualified.

The Nigerian athlete showed great determination to end Nigeria’s medal drought at the World Championships after failing to achieve anything in the semi-finals, just a day after beating the African record in the opening heats.

It was an emotional moment for Amusan on the podium as she sang the Nigerian national anthem.

This was the first time the Nigerian national anthem had been played in a senior league since 2000.

Standing on the podium, she received her check for $100,000 for her efforts to break a world record.