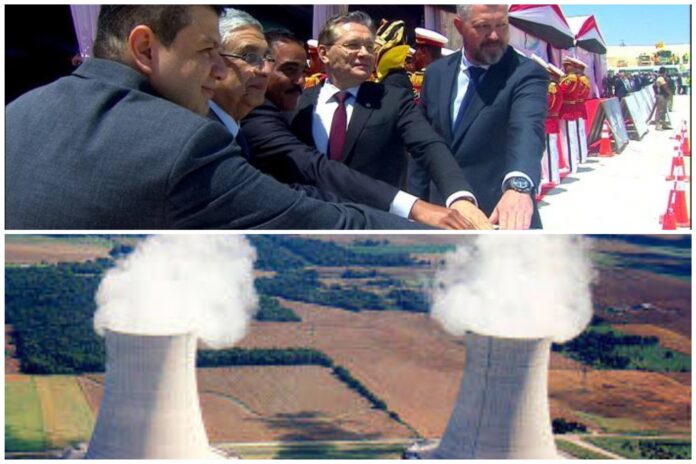 Rosatom boss Alexey Likhachev and Egypt’s Energy Minister Mohamed Shaker poured concrete into what will serve as the base for the plant, marking a “historic event” for Egypt, Shaker said.
Likhachev said that Egypt has now “joined the nuclear club”.

According to Egyptian media, the project, which was financed with a loan from Russia, will cost around 25 billion euros and four 1,200 megawatt reactors are planned.

The statement did not say when the works will be completed. However, In 2017, after el-Sisi and Putin signed the contract, Rosatom said the facility would be ready in 2028 or 2029, but construction has already been delayed by several years.

According to the joint statement, the plant in El-Dabaa will use pressurized water reactors similar to those at Russian nuclear plants in Novovoronezh and Leningrad.

Cairo first announced that it was considering a nuclear plant at El-Dabaa in the 1980s, although the project was put on hold after the 1986 Chernobyl disaster. But el-Sissi, who has launched several megaprojects since coming to power in 2014, seemed determined to launch the main nuclear initiative.

As host of this year’s UN climate summit COP27, Egypt aims to increase the share of its electricity generation capacity from renewable sources to 40% by 2030 and 42% by 2035.

“The facility will be the biggest Russian-Egyptian cooperation project since the Aswan dam,” Likhachev said on Wednesday. He was referring to the 111-meter-high, 3.6-kilometer-wide dam that uses the Nile for hydroelectric power and irrigation.