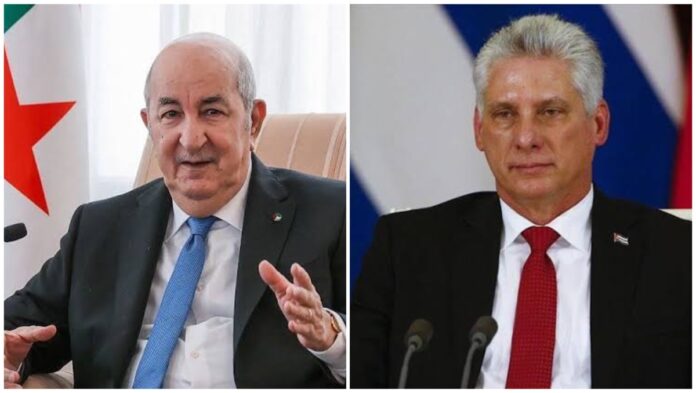 On Thursday, Algerian President Abdelmadjid Tebboune announced the cancellation of all interest on Cuban debt, the postponement of its payment and a supply of energy to help the country with its economic and energy problems.

After his meeting with his Cuban counterpart, Miguel Diaz-Canel, President Tebboune said in a press conference that the step came to alleviate the situation and the economic pressures that Cuba is suffering, in addition to the decision to supply energy to Cuba and start projects. in different industries.

The Algerian President highlighted the good relations between Algeria and Cuba, which made the Cuban President’s visit an opportunity to re-establish and consolidate relations.

“Algeria is committed to its sister republic of Cuba,” Tebboune said, adding that Algeria has notable historical ties with Cuba.

“We agreed to produce medicines together, in particular serums and vaccines against African and non-African diseases”, added the Algerian President.

Tebboune also announced that Cuba would be gifted with a solar power plant and that it would resume fuel supplies to reactivate the plants and end frequent outages.

For his part, the Cuban President said: “Cooperation between Cuba and Algeria is very strengthened and is an exemplary model”, adding: “We achieved historic cooperation in the field of health in 60 years”.

He emphasized: “Our relations with Algeria are good at the political and international level, and our international positions are consistent.”

“We applaud Algeria’s deep understanding of the economic situation in Cuba and appreciate its historic support,” said Diaz-Canel.

The Cuban president indicated his country’s readiness for “deep cooperation in the fields of culture and the exchange of scientific knowledge”, adding: “We are ready to cooperate with Algeria in the development of the sugar industry and benefit from Algerian dates.”

The friendly and business visit of the Cuban president to Algeria coincides with the celebrations between the two countries for the 60 years of their historic diplomatic relations, which actually began before Algeria’s independence and in support of the just cause of the people and their right to liberation.