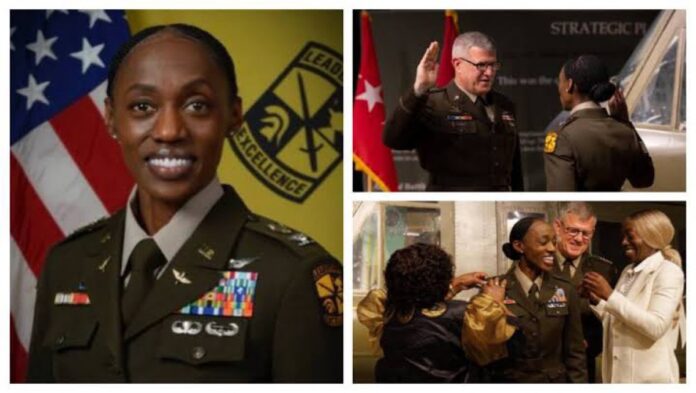 Senior US Army officer Amanda Azuboyki of Zimbabwean and Nigerian descent has been promoted to brigadier general.

Amanda, whose father and mother are Nigerians and Zimbabweans, works at a military base in Fort Knox, Kentucky.

US Army Commander General James Rainey said Amanda “makes everyone around her better”.

Born in London, UK, she joined the Army in 1994 and became a pilot after passing the Basic Army Aviation Officers Course.

Amanda graduated from the University of Central Arkansas in December 1993 with a bachelor’s degree in communications.

The officer graduated from flight school as a UH-1 pilot in 1995 and began her career in the 924th Aviation Support Battalion at Hunter Army Airfield, Georgia.

She attended the Public Relations Officer Qualification Course and was assigned to the Coalition Forces Land Component Command in Kuwait from July 2005 to June 2006.

Amanda was the head of media relations and public affairs operations officer at US Army Central Command headquarters in Fort McPherson, Georgia.

The general also worked in the office of the Pentagon’s head of public affairs in the Division of Community Outreach.

She was head of public affairs at US Southern Command headquarters in Doral, Florida and senior military assistant to the deputy director of the Office of the Secretary of Defense at the Pentagon.