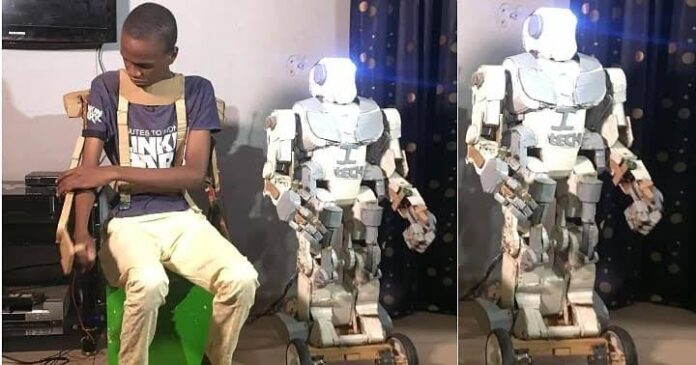 A 17-year-old boy from Kano State, Isah Auwal-Barde, has invented a robot that works with a robotic exoskeleton remote control.

The exoskeleton remote control is a system for controlling a robot through demonstrating with parts of the operator’s body.

Auwal-Barde told the Nigerian News Agency (NAN) in an interview on Saturday that he grew up with a passion for creativity.

He stated that he graduated from the Government Secondary School (GSS) in Sabuwar-Kofa, Kano in 2021 and received seven credits in science subjects from the West African Examination Council (WAEC).

Auwal-Barde said: “It took me two years to invent the robot, using local materials such as DC motors, copper wire, tubes, corrugated cardboard and metal, among others, and the robot runs on electricity.

“I want to become a robotics engineer so I can produce robots that can be used to solve security challenges in the country,” he said.

Also, read; ”We Have Paid All Debts Since Sanctions Were Lifted”- Mali’s Finance Ministry Says

Auwal-Barde explained that his father was instrumental in encouraging him to ensure the project’s success.

“I appreciate my father pushing me to complete the project successfully.

Now, he continued, “I want to earn a scholarship so that I can finish my studies abroad and realize my dream of becoming a robotics engineer.”

Auwal-Barde went on to say that his robotics engineering skills prompted a delegation from the National Center for Artificial Intelligence and Robotics (NCAIR) to visit him.

According to him, the delegation promised that he would be admitted to one of the indigenous universities to study computer science.

Commenting on the development, his father Auwal Barde said the boy grew up with a passion for creativity.

Barde said he always encouraged his son and never stopped him from realizing his potential.

“I encouraged him and predicted that he will become a robotics engineer in the future.

He was the one who fixed our electrical and technological items whenever they broke,” Barde added.

He asked the government to support his son with a scholarship to study robotics abroad.

Barde said this would allow him to reach his full potential and help build a nation.