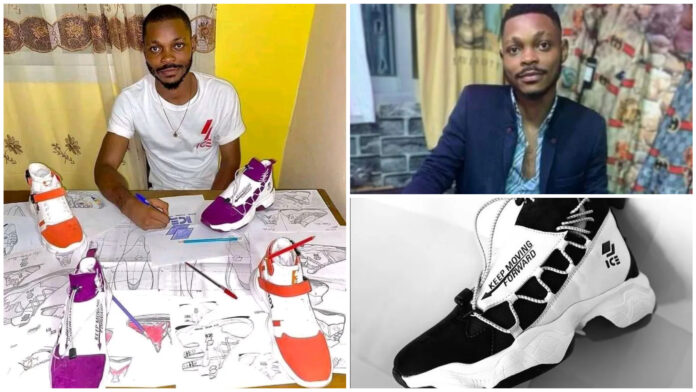 A 24-year-old Cameroonian called Ayissi William has gotten attention from social media users and fashion enthusiasts around Africa for his creative designs and production of locally made Sneakers.

Ayissi William is a Cameroonian sneaker designer and the founder and designer of ICE Footwear, the first locally designed sneaker in Cameroon.

ICE Footwear was founded in 2021 with the alternative intention of inspiring young Africans to pursue their dreams and put more effort into their work.

Ayissi William dropped out of college in 2017 after the 24-year-old studied accounting for a little while. However, before starting ICE Footwear merchandise, Ayissi took the time to learn the “ins and outs” of sneaker design.

Ayissi William was a sneaker fan as a child, but never had the opportunity to own multiple pairs. So he had to be meticulous with the rich, because he didn’t want to harm them.

Realizing the exquisite sneaker brands of Nike, Adidas and Puma inspired William to set the benchmark for the creation of ICE Footwear.

“I felt like I could definitely do something like this, and the fact that a lot of people don’t do something like that from where I’m from also made me want to do it, even more so because I know I can,” Ayissi William told The African Dream. He added that his dreams and believe is responsible for “why ICE Footwear was launched in 2021.”

It can be a journey of whirlwinds and setbacks to start a business in Africa. Not surprisingly, Ayissi William experienced the same thing. As a sneaker brand, Ayissi William faces the current threat of eclipsing established and popular brands (Nike, Adidas and Puma) in Africa.

However, Ayissi William firmly believes that the uniqueness and embellished look of the sneakers easily set their products apart from other brands.

A pair of ICE shoes costs US$50 and the products are only available in Cameroon and South Africa. However, management plans to make them accessible in different countries and help interested customers get to know the sneakers. Although William dreams of a future where he can make international deliveries across nations in Europe.

Ayissi William suggests it would be a “good idea to diversify”. Many sectors are barren and unexplored. He also urged aspiring designers to find their own identity that can be easily recognized by anyone. “You have to do something different to stand out,” said Ayissi William in an interview with The African Dream.