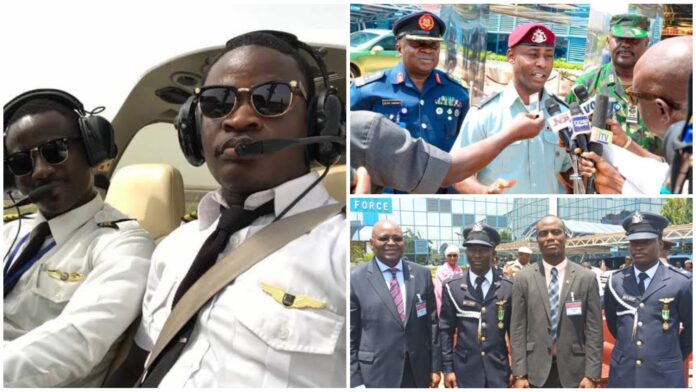 According to a special assistant to the Nigerian president, the Nigerian Air Force (NAF) is helping Liberia to reactivate its air force, which was disbanded in 2005.

The Air Chief of Staff (CAS), Air Marshal Oldayo Amao, had previously expressed the country’s willingness to do so when he received the Chief of Staff (CoS), AFL Major General Prince Charles Johnson III, who was in a courtesy visit to headquarters of NAF (HQ NAF), Abuja.

In a statement by the Director of Public Affairs and Information, Air Cdre Edward Gabkwet, CAS, represented by the Chief of Policy and Plans, Deputy Air Marshal Charles Ohwo, said that the NAF had the technical and engineering support necessary to ensure the activation from the Air Wing to the AFL.

He assured the visitor of the NAF’s continued support in providing refresher training to the only two existing AFL pilots trained in Nigeria, adding that the NAF would continue to support the training of AFL pilots to operationalize their guaranteed air wing.

“Whenever you have pilots for further training, please be assured that our training schools are open to them to become full-fledged pilots through the Nigeria Air Force Pilot Training Scheme,” the Air Chief said.

He also urged the AFL to use the NAF’s engineering and technical schools for non-pilot courses such as air traffic control and ground support personnel.

CAS also promised that the NAF would assist the AFL in providing airlift capability for AFL contingents to the United Nations Multidimensional Integrated Stabilization Mission (MINUSMA) in Mali once the request was made.

In his speech, Major General Prince Charles Johnson III of Liberia said he was in Nigeria to further strengthen bilateral ties between the AFL and the Armed Forces of Nigeria (AFN) and promised the AFN his support for Liberia over the years, particularly during civil war worthy war.

Charles praised the role of the AFN’s “big brother” as a regional superpower, adding that the relative peace and stability his country enjoys and its achievements are a result of tremendous support from Nigeria.

He noted that most senior NAF officers, some of whom are still in service, would have sacrificed much to help Liberia get back on track after the country’s devastating civil war.

Major General Charles further stated that the country’s strategic military objective is to establish an air wing or air reconnaissance unit for the AFL, as required by the Liberian National Defense Act, which has yet to be updated.

He therefore requested technical assistance from the NAF to facilitate the establishment of his air squadron, taking into account the NAF’s experience in the air force, adding that Nigeria’s military support to Liberia is numerous and not overemphasized, particularly in training its pilots. can become.

He also called on the NAF to continue supporting the country in providing pilot internships and non-pilot courses to capitalize on Nigeria’s vast experience in defense and security.

Already, two pilots have since graduated from the program an attestation to Nigeria’s commitment to the agreement between both nations.