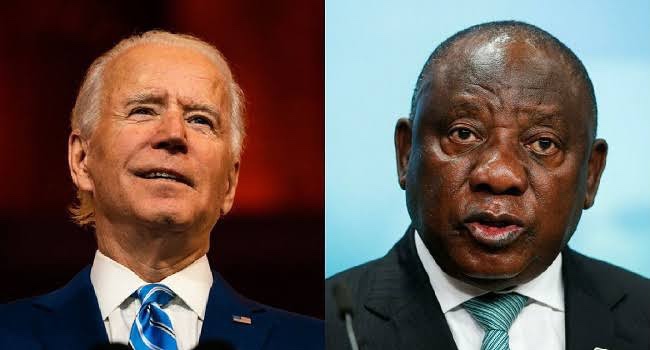 According to an announcement by the White House, President Ramaphosa of South Africa and the United States President, Joe Biden will meet on September 16 to discuss crucial matters especially as it pertains to development and climate change.

The government’s announcement on Thursday comes at a time when many of South Africa’s neighbors, including other African states, have declared their neutrality over Russia’s invasion of Ukraine.

The Biden administration sees the 54 countries of Africa as “equal partners” in addressing global issues, according to US Secretary of State Antony Blinken, who made the statement last month when visiting South Africa.

However, the government is disappointed that South Africa and much of the continent have refused to join the US in condemning Russia’s invasion of Ukraine.

South Africa abstained in a United Nations vote condemning Russia’s actions, and Ramaphosa avoided any criticism of Russia, calling for a mediated peace.

Biden and Ramaphosa, who spoke by phone in April, are expected to focus on trade and investment, infrastructure, climate and energy, public health and South Africa’s leadership on the continent, officials said.

White House Press Secretary Karine Jean-Pierre said in a statement announcing the meeting this month that “the two presidents will discuss our work together to address regional and global problems and underscore the importance of our enduring alliance.”

In December, Biden also intends to hold a conference of American and African leaders.

Foreign Minister Naledi Pandor upheld South Africa’s impartiality in the conflict in Ukraine during Blinken’s visit. After the meeting, Pandor held a press conference in which he accused the US and other Western nations of favoring the Ukrainian crisis over other global issues.

South Africa’s neutral stance is largely due to the support given by the Soviet Union during the Cold War to Ramaphosa’s African National Congress in its fight against apartheid – South Africa’s oppressive regime against the black majority that ended in 1994. South Africa is considered the leader of several African countries that will not oppose Russia.

The timing of Ramaphosa’s meeting with Biden is crucial because he is currently under fire from both his own party and the opposition over allegations that $4 million was stolen from his cattle ranch.

He was asked by lawmakers this week whether the foreign money had been properly registered with South African tax authorities and why he had not immediately reported the theft. The scandal has tarnished Ramaphosa’s reputation as a leader dedicated to fighting his country’s rampant corruption.