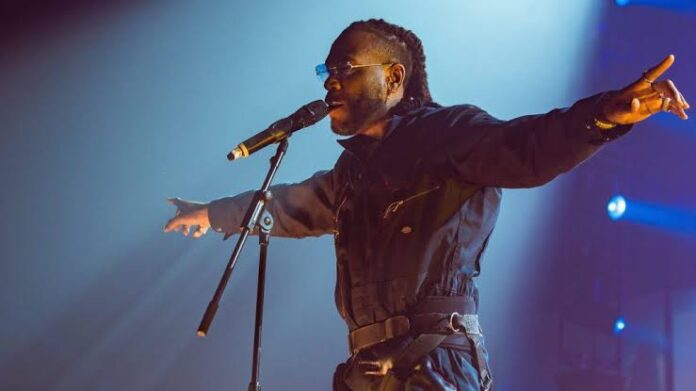 Tagged “One Night in Space,” Burna’s concert at Madison Square became the talk of the African media when he, among others, single-handedly sold out the concert and gave a show of a lifetime to fans.

While he entertained 20,000 people in the square, hundreds of thousands watched online via YouTube. These achievements have made Burna Boy a sensation beyond the shores of Africa. The live stream and concert took at least three hours with Burna Boy singing; jumping, and dancing to entertain thousands of fans around the world who displayed their excitement openly.

Those at the concert screamed his name as their favorite songs played. On the other hand, the streaming audience added thousands of comments in celebration.

Ghanaian singer Black Sherif’s Second Sermon Remix was one of the songs performed on the night. Recall that snippets from the said song have since become popular on social media.

Questions about when the African Giant’s new record would be released were prevalent before the concert.

On that night, he disclosed for the first time that the project would be released on July 2, 2022.
Burna; Damini Ebunoluwa Ogulu; appears to have transported his art to every corner of the globe, propelling the African continent forward.

Burna sold out the 20,300-seat Accor Arena in Paris twice; the 13,000-seat 3Arena in Ireland; and the 9,500-seat Geneva Arena in Switzerland on her recent European tour.

Along with his band, “The Outsiders,” Burna Boy gave a beautiful performance. Interestingly, the Outsiders; a band whose influence has since been known; became the first African band to perform on that stage. One could call it a perfect time for African music. As they say, “Afrobeat to the world.”