Celebrating the Life of Pelé, The Greatest Athlete of All Times 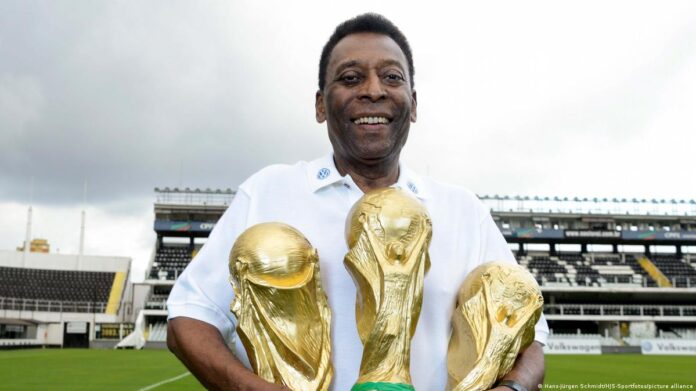 With the passing of Brazilian soccer legend Pele on December 29, 2022, several fans are reflecting on the career of one of the greatest top athletes of all time.

Pelé became a soccer icon with his performance in the 1958 World Cup. Pelé spent two decades playing professionally in Brazil, winning three World Cups along the way, before joining the New York Cosmos late in his career.

In 1999, he was named FIFA co-Player of the Century and served as a global advocate for soccer and other social causes.

Pelé, a legend, was not only a soccer genius but also a political figure in Brazil during the 1960s. Following his victory in the 1958 FIFA World Cup in Sweden, the Brazilian star garnered interest from prominent European clubs such as Juventus, Napoli, and the likes.

Edson Arantes do Nascimento was born on October 23, 1942, in the Minas Gerais city of Tres Coracoes in Southwestern Brazil.

At school, he was nicknamed Pele after mispronouncing the name of a Vasco da Gama player named Bile, who was claimed to be his favorite player growing up.

His father was Joo Ramos do Nascimento, also known as Dondinho, a great goal scorer for Fluminense.

Pelé was mentored and trained by his father, Dondinho. Celeste Arantes, Pele’s mother, was a full-time housekeeper for Dondinho.

She was not in favor of her child playing soccer since she believed that academics should take precedence over sports. She was concerned that being an athlete would suffer him injuries similar to those that had restricted her husband’s professional career.

Pele was given the name Edson in honor of American inventor Thomas Edison, who pioneered the generation of electric power.

Although his parents attempted to remove the letter ‘i’ from his name in order to make it sound more unique.

He grew up in poverty, while Joo Ramos, his dad battled to make a living as a soccer player.

Pelé’s parents relocated to the midwestern region of So Paulo, to a town called Bauru, where his father was a member of the Bauru Atlético Clube. Pelé began playing soccer in great poverty here, especially when his father retired in 1952.

Because his father could not afford to buy him a proper soccer ball, he was forced to play with balls constructed from stockings stuffed with old newspapers or grapefruit.

Dondinho, on the other hand, continued to inculcate in his son the ability to improve. Pelé rose through the ranks of Bauru Atlético Clube’s youth program, where Santos scout Waldemar de Brito first noticed him.

During his early adolescence, he played futsal (indoor football, or soccer) for a team called Radium. He acknowledges futsal in his autobiography for helping him think better on the go.

De Brito assured officials after bringing Pele to Santos in 1956 that the fifteen-year-old would be “the best [soccer] player in the world.”

This was nearly two years after Brazil was ousted by Hungary in the quarter-final stage of the 1954 World Cup in Switzerland in “The Battle of Berne.”

Pele made his debut for Santos in a 7-1 thumping of Corinthians de Santo André, scoring the first goal.

He was the league’s top scorer with seventeen goals in 1957, when he was given a starting spot at the age of sixteen. Coach Vincente Feola called him up to the national team for the 1958 edition, which was held in Sweden.

This came exactly eight years after Brazil was ousted at home by Uruguay in one of the biggest upsets in the competition’s history.

Pele, then seventeen, sat out the first two group-stage games against Austria and England. The match versus England was the first in World Cup history to end without a goal.

He played in the last group game, which The Seleção won 2-0, but it was in the quarter-final against Wales that he scored his first goal.

He came up with the game-winning goal in the 66th minute at Ullevi Stadium, sending Brazil to the semi-finals. Pele, at seventeen years old, became the FIFA World Cup’s youngest goal scorer.

Pele scored a hat-trick in a 5-2 triumph over France in the semifinals at Rsunda Stadium, while Vava and Dida also scored. The Blues’ only goals came from Fontaine and Roger Piantoni.

On June 29, 1958, at Solna, Sweden, O Canarinho faced the hosts Sweden in the final. West Germany had been eliminated by the hosts. Brazil matched their semifinal score, with Pele scoring twice.

His first goal was stunning to watch, as he got control of the ball inside the penalty area, chipped it over a defender, and slammed it past the goalkeeper.

His second goal came in the 90th minute on a stunning header. Pele is still the only player to have scored in the World Cup final before the age of eighteen.

Pele was voted the tournament’s best young player. With six goals, he was the joint second-highest goal scorer. This was the first World Cup to be broadcast internationally.

Playing against Pele was the most difficult challenge any player could face at the time. He could not be stopped, and he was unpredictable. To limit his aggressiveness, most defenders resorted to fouling him.

Brazil retained the crown during the 1962 tournament in Chile, but Pele only played two matches.

The first group game was against Mexico, when he scored the second goal in a 2-0 victory at Estadio Sausalito, and the second was against Czechoslovakia. The game finished in a scoreless tie, and Pele was hurt.

Although Brazil was eliminated in the group stage of the 1966 World Cup in England, Pele became the first player to score in three consecutive World Cups with a magnificent freekick against Bulgaria in the first match.

Due to the Bulgarians’ frequent fouls, Pele was unable to play in the following match against Hungary due to injury, and Brazil lost 3-1 at Goodison Park in Liverpool.

In the last group encounter against Portugal, Portuguese fullback Joao Morais made headlines when he double-fouled the Brazilian star, injuring his knee. Due to his injuries, Pele had to be replaced.

Despite the fact that the infractions were purposeful, English referee George McCabe permitted Morais to remain on the field without being booked. The Telegraph named this one of the top ten worst officiating mistakes in tournament history in 2010.

Pele was so emotionally and physically damaged by a number of premeditated fouls even from the previous tournament that he vowed never to play in the World Cup again.

Cards were not used in soccer at the time, but following this event and the constant fouls against Pele in the first match against Bulgaria, the soccer regulatory body introduced yellow/red cards four years later.

Due to the country’s political turmoil, the Brazilian squad returned home in 1966. Before the 1970 World Cup, Brazil selected Mario Zagallo to replace Joo Saldanha. Zagallo was a member of the World Cup-winning squads in 1958 and 1962.

Brazil won Group Three by defeating Czechoslovakia, England, and Romania 4-1, 1-0, and 3-2, respectively. They defeated Peru 4-2 in the quarter-finals in Guadalajara’s Estadio Jalisco before defeating Uruguay 3-1 in the semifinals to meet Italy in the final.

On June 21, 1970, at the Estadio Azteca in Mexico City, Brazil defeated Italy with four goals and a defensive approach.

Brazil won all of its matches with a goal differential of three or more en route to the final. Pele scored inside the first eighteen minutes, and Gerson, Jairzinho, and Carlos Alberto scored the other three goals for Brazil. Italy’s lone goal came from Roberto Boninsegna.

This Brazilian team is still largely regarded as the best of all time. It was the first World Cup in which Pele participated in every game and was selected tournament MVP.

Also, he makes history for most World Cup trophies as a player who appeared in all three of Brazil’s first three winning campaigns.

Legacy and death of an icon

In 1994, he was named a UNESCO Goodwill Ambassador. President Fernando Henrique Cardoso named him as the Extraordinary Minister of Sports in Brazil in January 1995.

With the passage of the Pele law during his reign, several measures were made to combat corruption in local soccer associations, but he resigned in 1998.

Pelé and Argentine Diego Maradona were voted FIFA’s “Co-Players of the Century” in 1999. To many, his achievements on the soccer field will never be matched, and almost all great athletes in the sport are compared against the Brazilian who once stopped the globe to watch his spectacular play.

He was also named to Time magazine’s list of the one hundred most influential individuals of the twentieth century, and the International Olympic Committee named him Athlete of the Century in 1999. Pele set a Guinness World Record with 1,279 goals in 1,363 games.

He was admitted to Albert Einstein Israelite Hospital in So Paulo on November 29, 2022. According to a medical assessment, he had cardiac and renal problems. Since September 2021, Pele has been battling colon cancer. On Thursday, December 29, 2022, he died.