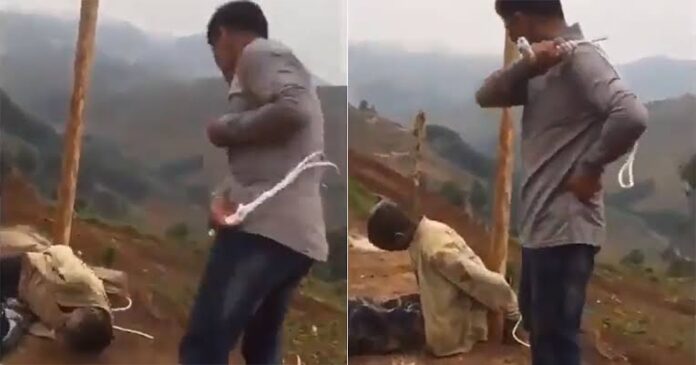 Sun Shujun, a Chinese businessman based in Rwanda, has been sentenced to 20 years in prison for torture. The businessman, who also serves as a mine manager, was caught beating up a local worker while a video of his actions was taken and shared on social media.

Interestingly, Shujun had been accused of beating up his workers on several occasions. However, the video in question particularly drew the attention of dozens of social media users. Many tagged his actions as inhumane treatment, likened to that which was inflicted on slaves by their masters. The businessman was seen on camera whipping a man who had been tethered to a pole on the ground.

During his trial, which was presided over by Judge Jacques Kanyarukiga, it was noted that the actions in the video present the idea that Sun “tortured the victims and issued corporal punishment with malicious intent, and this is a grave crime”.

While Sun Shujun got 20 years in prison for his crimes; a Rwandan man, Renzaho Alexis, got a sentence of 12 years for his alleged role as an accomplice in the beatings.

When asked about his actions, Sun stated that he simply became frustrated with the workers. He claimed that they had grown fond of stealing minerals from the mines. On the other hand, Sun Shujun was convinced that he should be released. He argued that his release should be facilitated by the simple fact that it compensated the two individuals. Shujun claimed he compensated the victims with more than 1 million Rwandan francs (about US $1,000) and also signed a “reconciliation letter”.

However, the prosecution stated that the victims took the cash “because they were traumatized and terrified of him;” despite the fact that he was accused of attacking four individuals.

Last year, a 45-second video of one incident went viral online; showing a visibly agitated Chinese man flogging a man hunched on the ground and chained to a pole. The video also shows a small group of people in orange jackets watching as the incident takes place. The mine produces cassiterite, which is the primary tin ore.

The Chinese embassy in Rwanda issued a statement on Wednesday. It acknowledged the judgment and urged Chinese residents living in Rwanda to follow local rules.

On the other hand, the embassy urges that the issue be handled in a rational, fair, and just manner and that the legitimate rights of the Chinese people be adequately protected. ” Sun, who had been out on bond; was detained and taken away by security after the verdict. He has 30 days to file an appeal.