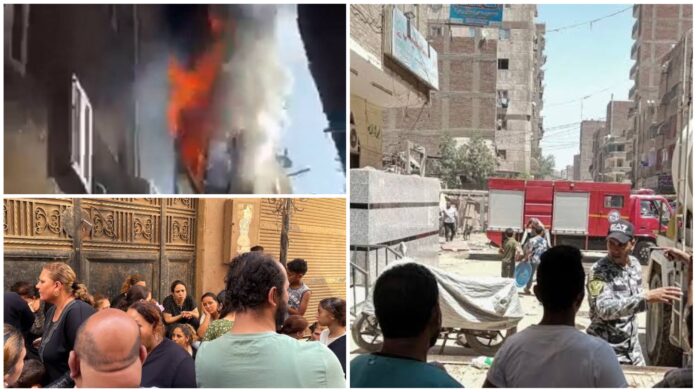 A fire ripped through a crowded Coptic Orthodox Church during morning services near the Egyptian capital, killing 41 worshipers, including 10 children.

Several people trapped inside and exposed to thick black smoke jumped from the upper floors of the Martyrs Abu Sefein Church to try to escape the raging flames, witnesses said.

“Suffocation, asphyxiation, all dead,” said a perplexed witness, who gave only part of his name, Abu Bishoy.

“There are kids, and we had no idea how to get them,” said Abu Bishoy.

45 people were injured, including four police officers involved in the rescue effort.

Weeping families waited outside for news from relatives who were still in the church and in nearby hospitals where the victims were being taken.

The fire started in the church in Giza, Upper Cairo, in the working-class neighborhood of Imbaba, where around 5,000 people had gathered. Giza, Egypt’s second largest city, is across the Nile from Cairo.

In a statement, the Interior Ministry said a forensic investigation showed the fire started in the second-floor air conditioning system as a result of an electrical fault.

Smoke inhalation was the leading cause of death, he said. The families of the deceased will receive 100,000 Egyptian pounds ($5,220), according to a statement from the cabinet.

Mousa Ibrahim, a spokesman for the Coptic Orthodox Church, said among the dead were five-year-old triplets, their mother, grandmother and an aunt. He said funerals for the dead will be held at two churches in the Waraq neighborhood.

Witness Emad Hanna said that the church has two locations that are used as daycare centers and that a church employee managed to get some children out.

“We went up and we found people dead. And we started to see outside that the smoke was getting bigger and people wanted to jump up,” Hanna said.

“We found the children,” he said, some dead, some alive.

Fifteen fire engines were sent to the scene to put out the flames while ambulances took the injured to nearby hospitals.

El-Sisi posted a message to his followers on Twitter, saying, “I extend my profound condolences to the families of the innocent victims who went to see their Lord at one of his sites of worship.”

“I mobilized all government agencies to ensure that all actions were taken,” he added on his Facebook page.

Maher Murad said he left his sister at the church after prayer.

“As soon as I got within 10 meters of the church, I heard screams and saw thick smoke,” he said.

“I identified my sister’s body when the firefighters extinguished the flames. Many of the victims were youngsters who were in a church nursery, and all of the bodies were burnt.”

Hamada el-Sawy, the nation’s top prosecutor, issued an investigative order and dispatched a team of prosecutors to the church.

Copts are the largest Christian community in the Middle East, representing at least 10 million of Egypt’s population of 103 million.

Egypt has recently had a number of devastating fires.

At least 20 persons perished in a fire at a textile plant in the eastern suburbs of Cairo in March 2021.