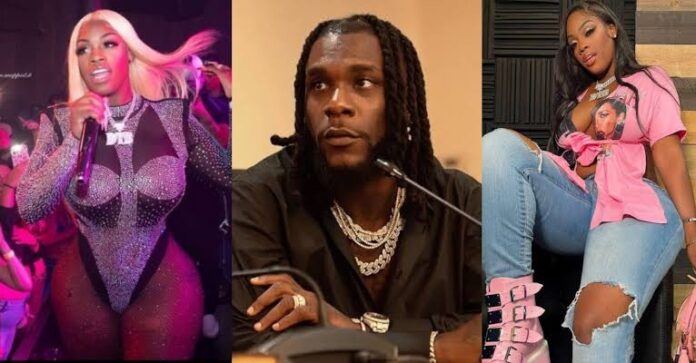 Social media users have been talking about Burna Boy since Sunday morning after Jamaican artist, Diamond the Body, posted a photo marking her alleged romantic affair with the Afrobeat star.

The beautiful, curvaceous, Jamaican rapper shared an intimate photo of herself and the singer cuddling on the mattress in a now-deleted Instagram story.

Although Burna Boy’s face was not in the picture, his tattoos looked like they had given him up.

In the caption, the rapper revealed that the Grammy-winning singer told her that he felt safer with her.

As the post raised doubts amid the ensuing controversy, many netizens confirmed that they saw the posts before they went offline.

Taking to Instagram for her latest post, followers criticized the rapper in the comments section for revealing her alleged affair.

Recall that Burna boy and his ex-lover, Stefflondon had broken up a while ago with several rumors of cheating and yet to be identified reasons for their detachment. While the Afro beat star went on to release a track explaining his heart ache after the break-up, little was known about Stefflon Don’s side of the story.

The “power couple” has called it quits, according to Grammy winner Burna Boy, who started dating Steff in the middle of 2019. The now-famous song’s chorus contains the line “last, last… na everybody go chop breakfast,” which alludes to the slang phrase for “heartbreak and disappointment.”