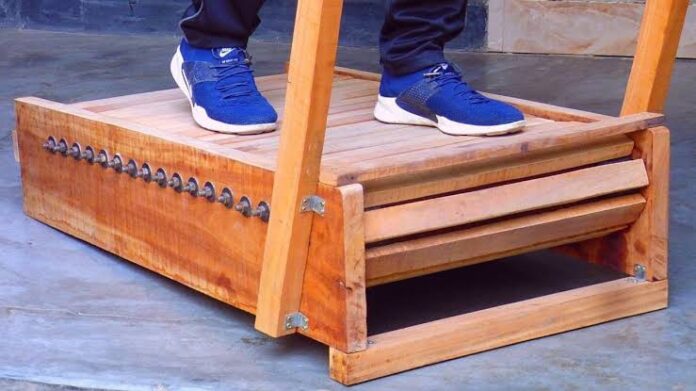 Désiré Kabengela recently became a sensation when the world got to know about his innovative actions.

The young Congolese student created the first African-made treadmill in his small workshop in Goma.

The 24-year-old made the treadmill using strictly wood. The treadmill is an interesting innovation because, despite being made with wood, it conforms to international standards.

Désiré explained the motive behind his actions; he claimed that he made this incredible machine to keep himself busy.

This unique hardwood device was developed to suit the demands and needs of all athletes, whether they run or walk.

It can also help amateur athletes increase their endurance, fight cardiovascular disease, lower their risk of high blood pressure, and many other benefits.

Experts in the world of sports have already given their approval to this gadget. Those who have tried it have given it positive reviews.

Reviewing the device, Karwichi Emmanuel, a coach, stated that due to his profession; he has been able to enjoy the use of this device. He added that there is a need to support initiatives such as that of Désiré.

Emmanuel also stated things he believes should be actively worked on the device for improvement’s sake; “On the improvement plan, it should work on the noises, because when you increase your speed we have noise that comes out,” Emanuel said.

This equipment also makes it easier for folks who have trouble getting to the gym. It can be used in a variety of settings, including offices and homes.

One of those who also gave a review of the project was Marcelin Mutabazi.

“You know that we are in Goma, we always have a lack of electricity, with this carpet you can use it anytime even if you do not have electricity,” Mutabazi said.

As long as the geography is flat, the equipment can be used in any place. Its innovation is beneficial to those who live in remote areas without access to electricity.

The speed variation is determined by the user’s pace, energy, and weight.

It is also important to note that this idea is the brainchild of a young Congolese student at the Higher Institute of Applied Techniques (ISTA) Goma, who is still studying electromechanical engineering.

This was his principal project for his third-year public defense.

Read also; How Bee Venom Is Used as an Alternative Medicine In Uganda