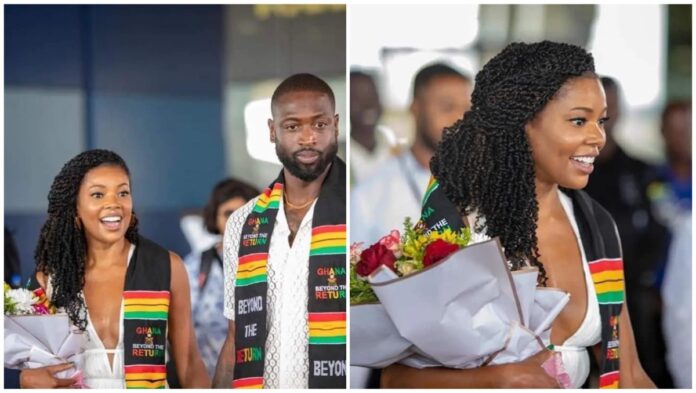 NBA star Dwyane Wade and famous actress Gabrielle Union-Wade arrived in Ghana in grand style in an event that has since received media attention in the beautiful West African Country.

They were seen shortly after landing at Kotoka International Airport on Monday, October 31, 2022.

The couple was traveling with their three-year-old daughter Kavya.

Over the years, Ghana has become a hub for travelers as the year draws to a close with many festivals in the country at this time.

Gabrielle is now known by the Ghanaian people as Akosua Sappho while her husband is also known as Kwesi Sappho, both names given to them by locals who enjoyed their company.

The couple received their Ghanaian names after honoring Diallo Sombre, CEO of the Adinkra Group, as Nkosuohene (head of development) in Nyame Bekyere, a municipality between Adawso and Koforidua in the eastern region of Ghana.

Sombrey welcomed the couple to the country before it was revealed that Dwyane Wade is now known as Kwesi Sappu and his wife is now Akusua Safu.

The Wade family arrived in Ghana as part of Gabrielle’s African tour to celebrate her 50th birthday.

They were in Zanzibar, Tanzania before stopping in Accra, Ghana on Monday 31st October.

Gabrielle Union recalled her recent visit to Ghana with husband Dwayne Wade and daughter Kavya as part of their international adventures to mark the actress’ 50th birthday.

The Bring It On alumnus gave her Instagram followers a glimpse into the journey – dubbed the Wade World Tour – with a beautiful video showing the family of three being honored at a ceremony upon arrival in Accra, Ghana.

In the clip, Union, Wade and their 3-year-old daughter are dressed in Kente outfits and given Ghanaian names, according to the Ghanaian website.

“Ghana owes us nothing, but it has given us everything!” The ‘Breaking In’ star wrote in a comment on her post on Tuesday, November 1, that her son “felt at home” in the West African country.

She added “WadeWorldTour2022 🇬🇭” along with the hashtags “#Ghana”, “#ThisIs50” and “#scorpioseason”. The post is also featured on the Kool & The Gang track “Celebration”.