Elizabeth Nalem, the Kenyan Woman Who Left Her Husband Of 20yrs To Marry The “Holy Spirit” has been Found Dead 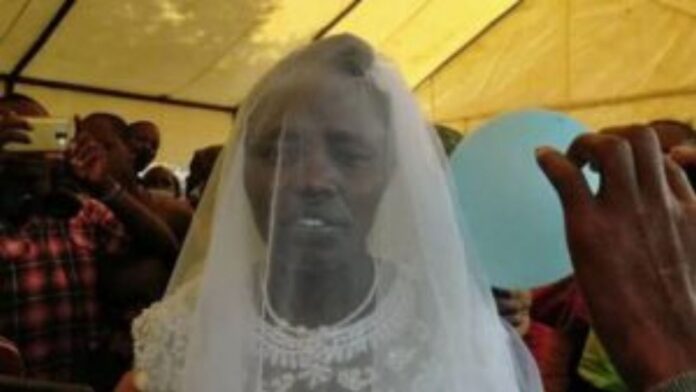 Elizabeth Nalem, a woman in Kapenguria, West Pokot County in Kenya’s Rift Valley who left her husband to marry the Holy spirit has been found dead.

Prior to her death, Elizabeth made claims that she married the holy spirit because it was a directive by God.

Elizabeth Nalem claimed that God appeared to her in a dream and instructed her to leave her husband to spread His word.

She also alleged that the Holy Spirit directed her to Pastor Albert Rumaita to buy her a gown and hire vehicles.

Elizabeth was helped by family and friends, as she made a dramatic entrance into the town in an appealing white bridal gown on her May 26, 2021, wedding to the Holy Spirit.

Things took a tragic turn when her decomposing and mutilated body was found on Saturday, April 2.

According to  Police reports, Elizabeth Nalem had left her home a week earlier with a panga and a walking stick; and headed to the forest only for her body to be found later.

Police say there is a possibility the deceased had been attacked by wild animals and feasted on her remains.

Kapenguria OCPD Kipkemoi Kirui said investigations are ongoing to establish if Elizabeth Nalem was attacked. He also said the body must have been in the bush for more than a week.

According to her husband Joshua Nalem; “The body was badly mutilated and stinking. Some body parts are missing,”

Her husband told reporters that he tried on so many occasions to stop his wife from leaving but she refused.

He added that he started having troubles with his wife following her new prayer habits. “She went to church one day, and when she returned, she started waking up at 3 am to go and pray. I asked her why she was braving the chilly weather just to pray, but instead, she decided to move out to a neighboring homestead.”