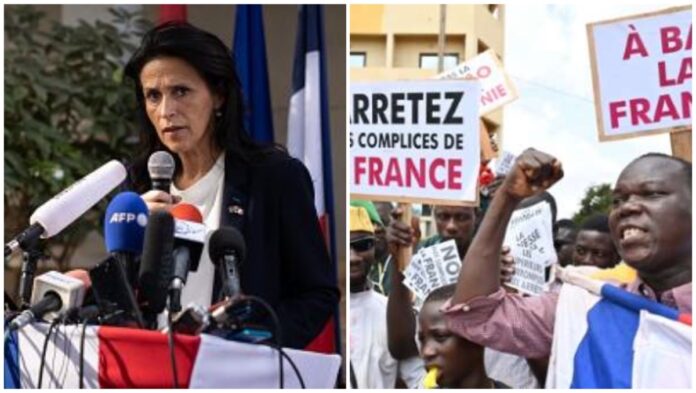 The French vice-chancellor, who is visiting Burkina Faso, has denied accusations that Paris wants to meddle in the already troubled former colony.

After her meeting with the leader of the junta, Captain Ibrahim Traoré, Minister Chrysoula Zacharopoulou emphasized that France “is not forcing anything” in Burkina Faso.

“I have come to deliver a clear message, namely the continued commitment of my country, France, at an important time. In line with this message, France remains committed at all levels, humanitarian, security and development, to the extent and in the forms requested by the authorities of Burkina Faso.”

The ongoing Operation Saber, aimed at tracking down jihadist leaders in the Sahel region, was also discussed.

Also, read; Church of England Body Apologizes For Past Links To Slavery

“As for Saber (the special operation tasked with tracking jihadist leaders in the Sahel, ed.), we remain present as long as our presence is desired. Saber soldiers are present with the approval of the country’s authorities. We are in a state of sovereignty, it is up to the country to decide on the choice of its partners”, explained Zacaropolou.

The talks between the two countries come in response to mounting pressure over allegations of neocolonialism, growing anti-French sentiment promoted by Captain Traore and critics calling for closer ties with Moscow.

Burkina Faso is reeling from a jihadist insurgency that swept neighboring Mali in 2015.

Thousands of people have been killed and nearly two million fled their homes, sparking a security and humanitarian crisis that has fueled two coups in the past year.

More than a third of the country is outside government control.

In December, the junta ordered the suspension of Radio France Internationale (RFI), accusing the station of broadcasting an “intimidating message” from a “terrorist leader”.