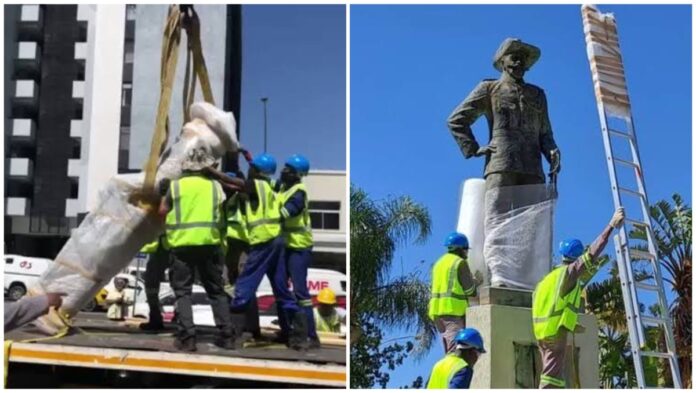 In Namibia’s capital, Windhoek, a statue of a controversial German colonial official has been removed due to pressure from activists.

A statue of Kurt Von François was erected in 1965 to commemorate him as the city’s founder. Activists dismissed the claim as a “lie” and said it was a symbol of “colonial oppression”.

It is the latest statue to be removed in a global campaign against colonial-era symbols. Two years ago a statue of British imperialist Cecil Rhodes was decapitated in neighboring South Africa.

Von François was a senior military officer in what was then South West Africa between 1889 and 1894 when it was a German colony.

In the 1890s he led an operation to put down a growing Nama rebellion that resulted in the deaths of at least 80 people, mostly women and children. It later became known as the Horncrans Massacre.

The campaign to remove the statue was spearheaded by a group calling themselves the Curt Farewell.

Activist Hildegard Titus, who led the petition to have the statue toppled, told the Namibian news website about her activities as it pertains to its removal.

She said von François had been “mistakenly called the founder of Windhoek.” However, he stands as a symbol of “colonial oppression”.

The decision to remove the statue in front of Windhoek City Council’s main office was made last month.

It will remain in a museum for now, but will be “rebuilt” once a new location is agreed, city spokesman Harold Aquinas said.

The statue was first erected when Namibia was under the control of South Africa and then under the rule of the white minority regime.

It gained its independence from South Africa in 1990, the same year anti-apartheid icon Nelson Mandela was released from prison.