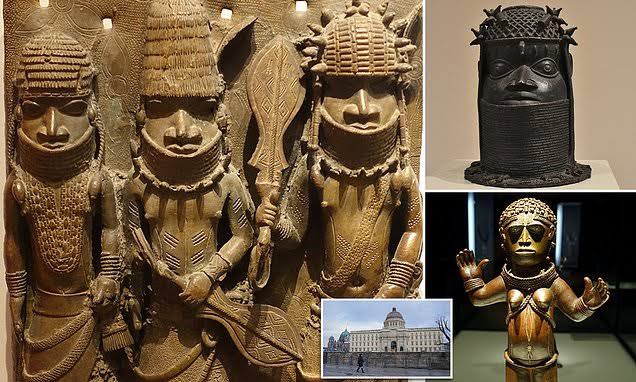 Germany has agreed to return a treasure trove of looted African colonial-era artifacts, including over 1,000 Benin bronzes, to be repatriated to Nigeria.

The German government has agreed with Nigeria on the return of around 1,130 Benin bronzes with a signed corresponding document, solidifying the agreement.

The collection of metal plaques and sculptures that adorned the Royal Palace of the Kingdom of Benin in what is now south-western Nigeria was looted during the colonial era.

The bronzes, which have found their way into 20 museums across Germany, were largely looted by British forces when they captured, burned and sacked the city of Benin in 1897.

The priceless Benin bronzes will be returned to Nigeria after German Foreign Minister Annalena Baerbock and Culture and Media Commissioner Claudia Roth signed a memorandum of understanding with their Nigerian counterparts in Berlin on Friday.

Roth claimed that the signed agreement will pave the way for a quick and seamless transfer of ownership to Nigeria.

In a statement from the Prussian Cultural Heritage Foundation, Roth noted that the return of the Benin artifacts is a sign of Germany’s commitment to its effort to come to terms with its “colonial history,” a commitment which he believes will mark a “new beginning.”

“The agreement to be signed between the Nigerian and German governments is the general declaration for the return of around 1,130 Benin artifacts,” Abba Isa Tijani, director of Nigeria’s Museums and Monuments Authority, told DW.

According to reports, two bronzes are to be handed over to Nigeria immediately after the signing of the Memorandum of Understanding.

Recall that there has been a trend of repatriations of African artifacts from European nations over the past few months.

In February, France returned to Nigeria 26 bronzes stolen in 1892 by French colonial troops from the former kingdom of Dahomey, south of modern-day Benin.

For many decades, museums and political leaders in Germany – which was the third-largest colonial power after Britain and France until World War I – had avoided talks of concrete agreements on transfers or even restitutions.

However, that has changed since 2021, when representatives of the German and Nigerian governments and museums announced the decision to transfer ownership.