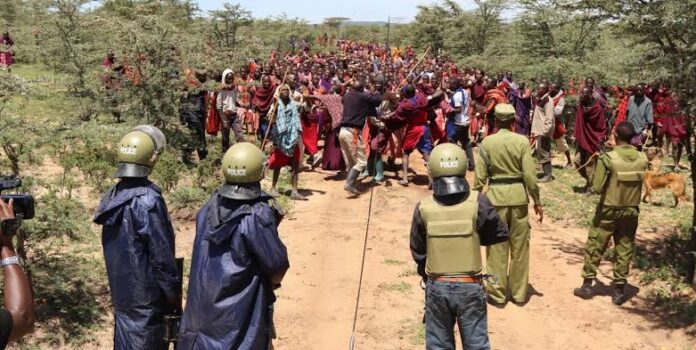 Despite international protests, the Tanzanian government is cracking down on Maasai herders who have resisted efforts to be evicted from their ancestral land.

According to reports, the Maasai land has now become a proposed game reserve that is rumored to be a private hunting ground near the world-famous Serengeti National Park.

Tanzanian authorities have since begun to attack Maasai leaders with accusations of murder and illegal immigration. The accusations come as the government intensifies its campaign to demarcate the reserve and relocate thousands of traditional herders.

As the government’s campaign grows wider and its intentions become clearer, Security forces have arrested dozens of Maasai men in recent weeks.

International groups ranging from Amnesty International to United Nations experts have criticized the Tanzanian government’s handling of the issue, with Amnesty denouncing the eviction campaign as an “illegal act of shocking brutality.”

Unfortunately, rumors of the Maasai land being taken over by wealthy Middle Eastern hunters, have since caused intensified protests across the area. Reports claim that the land was leased by a company from the United Arab Emirates as a hunting ground.

On June 10, as security forces began erecting markers on the edge of the proposed 1,500 square kilometer game reserve, they fired tear gas at Maasai protesters who had gathered at the scene in the Loliondo region, close to the Kenyan border.

At least 30 Maasai were injured in the ensuing violence and one policeman was reportedly killed by an arrow. Several hundred Maasai fled to Kenya in search of refuge or medical treatment.

Since then, authorities have arrested 23 Maasai for murder and announced a 10-day manhunt for “illegal immigrants” – their term for Maasai who crossed the Kenyan border.

Images have since emerged in northern Tanzania that appeared to show members of the Maasai community being evicted from the land around their village.

The photos were taken last week, days before Tanzanian authorities announced that the first group of Maasai families had left the Ngorongoro Conservation Area as part of a voluntary resettlement program to ease pressure on the local environment.

“My Tanzanians, don’t kill us. Why are you killing us? This land belongs to our grandparents”, a Maasai elder said.

Tanzanian officials, including the tourism minister and prime minister, have said the goal for the disputed area is conservation, claiming the growing numbers of Maasai and cattle in the countryside could put it at risk.

Also worth noting is that the entire Ngorongoro Conservation Area is a UNESCO World Heritage Site.