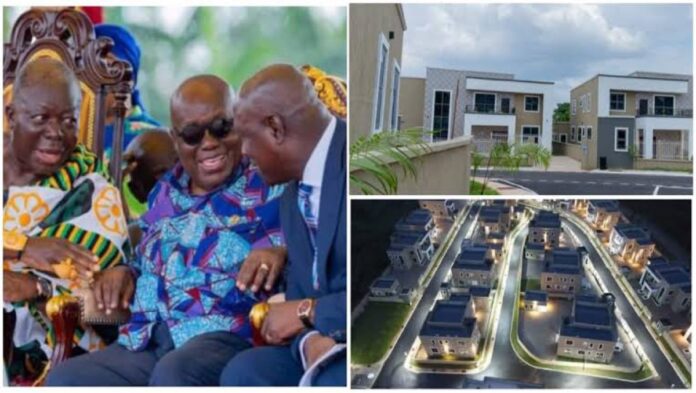 The construction was initiated by the president on April 20 of last year with the support of Asantehene, Otumfuo Osei Tutu II and Judge Annin Yeboah to launch a project of over five million dollars.

Spread over 7 hectares of land, it is a closed condominium of 20 units of four-bedroom apartments, outbuildings (men’s rooms), swimming pool, guest house, clubhouse and tennis court.

Six three-bedroom residential units with spaces for children and parking for managers and other administrative staff supporting the Justice Service were inaugurated.

The complex will serve as the permanent residence of judges of the Kumasi Court of Appeal and will be authorized to hear cases in the northern part of Ghana.

Also, read; CMS Grammar School: What you don’t know about the first secondary school in Nigeria

It was sponsored by the Department of Local Government, Decentralization and Rural Development through the District Association Common Fund.

The President expressed his hope that the provision of this facility would motivate the judiciary to work more to strengthen the country’s judicial system.

Reaffirming the government’s support for the judiciary in all its efforts, he said: “The government will continue to take steps to promote the rule of law, thereby increasing people’s confidence and enhancing our nation’s reputation as a country governed by the state of right”.

The president commended Asantehene for freeing up seven acres of land for the project and all of Asanteman for their support.

Judge Yeboah appointed that of President J. The Kufuor administration was completed in 2008.

However, he said that since judges do not have permanent residency, they often move away from Accra and Kumasi to handle cases, which are anathema because all appeal cases must be tried in Accra.

He spoke about strengthening the human resources of the judiciary and called on the government to secure financial approval so that some officials can be hired to guarantee the maintenance of the courts and others.