CMS Grammar School: What you don’t know about the first secondary school in Nigeria 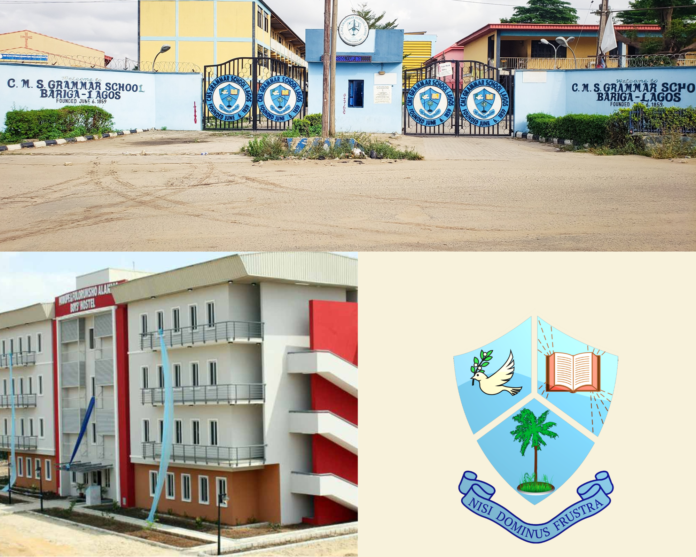 The Church Missionary Society (CMS) established CMS Grammar School Lagos, as a boarding school for boys on 6th June 1859. First arriving in Lagos in 1842 as Anglican Missionaries from Sierra Leone, they quickly realized that Lagos needed a good secondary school for their missionary work. As an example, Yoruba Mission members founded the school with the primary aim of offering secondary education to boys in Lagos, which wasn’t available at the time.

The seed funding for CMS Grammar School, Lagos was made possible by James Pinson Labulo Davies who in April 1859 provided Babington Macaulay with £50 (the equivalent of ₦1.34 million as of 2014) to buy books and equipment for the school. With the seed funding, Macaulay opened CMS Grammar School on 6 June 1859, which made it the first secondary school in Nigeria.

It began with six pupils, all boarders, in a small single-story building at Broad Street, the present site of Hallmark Bank: (UTC) Building. The first pupils were destined to be clergymen. The curriculum included English, Logic, Greek, Arithmetic, Geometry, Geography, History, Bible Knowledge, and Latin. It was the only secondary school in Nigeria offering training for future leaders for decades after it was founded.

CMS Grammar School produced most of the Anglican clergy and administrators in Nigeria until recently. Although a Mission school, it does not discriminate in its admissions, boys across different religious backgrounds and ethnicity were offered admission into the school through an entrance examination.

2 years later, after a British colony was established in Lagos in 1861, the British colonial authorities recruited most of their indigenous clerical and technical staffers from CMS Grammar School. Among them were Dr. Henry Carr, the first African Inspector of Education and, later, Administrator-General of Lagos Colony, and Herbert Macaulay, who later trained as a Surveyor.

From its inception, CMS Grammar School motto has been Nisi Dominus Frustrai, extracted from Psalm 127, meaning without God we labor in vain, which enshrined the faith of the founding fathers, and the tradition of the school.

The first Principal of the school, often referred to as its Founder, was the Revd Thomas Babington Macaulay, the father of the great Nigerian Nationalist, Herbert Heelas Macaulay. As a young lad, he had been taken from Fourah Bay College, Freetown, Sierra Leone, and sent to England for training as an Anglican Priest at the CMS Training College, at Islington and later at King’s College, University of London, from where he obtained a Bachelors Degree in Arts.

After completing his training in London, he was sent to Lagos in 1852 as an Anglican Missionary from where he was posted to the Anglican Training Institute at Ikija, Abeokuta. There, his superintendent, the Revd. Henry Townsend noted that his considerable talents could be put to better use as a schoolmaster. After six years at Ikija, he found his way back to Lagos and took the lead in plans for the founding of the School.

He was the one who laid the early traditions of the School, having been its Principal from 1859 until his death in 1879, a total of twenty years. He developed the CMS Grammar School into a famous school and was reputed to be a stern disciplinarian determined to instill moral discipline in the boys under his charge. From the very beginning, he made it his priority to assist the boys in the development of their character and to prepare them for public service. This has remained the tradition of the School to date.

Later, CMS Grammar School moved down the road from its Cotton Housel site at Broad Street, to more spacious accommodation, at the junction of Broad Street and Odunlami Street. It was at this new site that the first school Science laboratory was built in 1929, together with the Assembly Hall, the Principal’s Lodge, and a dining room for the boarders.

The school has been fortunate in having a succession of dedicated and diligent Principals who have continued to maintain its excellent academic traditions and moral discipline.

In 1909, fifty years after the founding of the School, King’s College, Lagos, was established by the colonial administrator making it the first state secondary school, with most of its foundation students drawn from the CMS Grammar School. The Revd. Canon (later Professor) EJ. Evans, a Scientist and well-known author of science books for secondary schools, who introduced the teaching of Science in the School, succeeded Revd. Fanimokun as Principal in 1951. It was he who in 1919 composed the song of the School, which was later harmonized by Fela Sowande, an old boy of the school.

In 1950 the Revd. Canon (later Archdeacon) B.A. Adelaja, an old boy of the School himself, took over as Principal of the School. He remained Principal for twenty years just like Revd. Thomas Babinton Macaulay. It was during the long tenure of Revd. Canon Adelaja as Principal that the school, after years of careful preparation, moved in 1958 to its present site at Bariga, which was virtually a virgin land on the outskirts of Lagos.

Understandably, many Old Grammarians, who remained sentimentally attached to the old site at Odunlami, privately expressed their reservations about the School moving to Bariga.
In retrospect, the decision to move the School to Bariga was wise and justified, as the old site in Central Lagos had become too small and cramped for the School, which needed new facilities such as a good sports arena, and modem science facilities.

All of these were accomplished at the new site during the tenure of Revd. Canon Adelaja. Known affectionately as Oga by the boys. Revd. Canon Adelaja will always be remembered for his outstanding contributions to the fame and physical development of the School, during his tenure as Principal. It is in recognition of this that the School Hall was posthumously named after him.

Many of the students of the School will always be remembered with affection by the old boys for their immense contributions to the progress and fame of the School.

Sadly, in 1979 the Lagos State Government, pleading public interest, took over the school, as all other private secondary schools in Lagos. Predictably, under government control, the School was badly neglected, and its high academic standards fell. The School’s boarding house was abandoned, its staff quarters acquired by the government, and new state schools were built on its grounds.

In 2001, under pressure from old boys of the School, it was returned to its owners, the Anglican Diocese, but without any financial compensation. The agitation for the return of the School to the Anglican Diocese was led by Mr. Akintola Williams, Otunba T.O.S. Benson SAN, Maj. General Henry Adefowope, Chief G.O.K. Ajayi SAN, and Ambassador Oladapo Fafowora, among others.

Gradually, the facilities in the School are being rehabilitated with the financial support of the old boys. It has now been fenced off completely. Restoring the School to its Old Glory has been a gigantic task, but it is a task that the alumni are determined to complete.
Since 1859, when the School was founded, it has made an outstanding contribution to the development of secondary education in Nigeria.

It has certainly fulfilled the dreams of its founders by producing some of Nigeria’s great leaders from all walks of life. This is a legacy of which Old Grammarians will always be proud. It is all owed to its Founder and First Principal, The Revd. Thomas Babington Macaulay.

Since the schools’ establishment in 1859, it has made an outstanding contribution to the development of secondary education in Nigeria. It has certainly fulfilled the dreams of its founders by producing some of Nigeria’s great leaders from all walks of life. This is a legacy of which Old Grammarians will always be proud. It is all owed to its Founder and First Principal, The Revd. Thomas Babington Macaulay.
Some notable alumni:

Also read: Nigeria today, as made by “Our Heroes Past” | Here are 16 of them