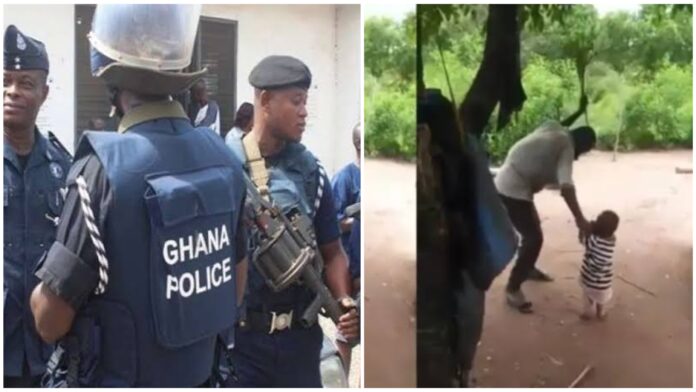 A man caught mercilessly beating a child in a video that went viral has been arrested by police in Ghana.

According to local media the young man, identified as Richard Kofi and also the victim’s father, was arrested on Wednesday, October 6, 2022.

He was arrested Wednesday afternoon at Aka Beam in Jasikan in the Oti region of Ghana.

Also, read; Ghana to Leverage Its Discovery of Lithium In Manufacturing Locally Made Solar Batteries

The suspect was supposedly arrested along with his wife, who many claims stood idly by as the abuse went on.

It is recalled that in the video, which went viral about three days ago, the suspect was seen whipping the boy, who is believed to be three years old.

The boy was seen crying helplessly in the video, and several people, including Ghanaian gospel musician Sonnie Badu, who came across the video on social media, were outraged and called on the police to arrest the man and rescue the child.

After the arrest, the child was turned over to the Ghanaian police service.