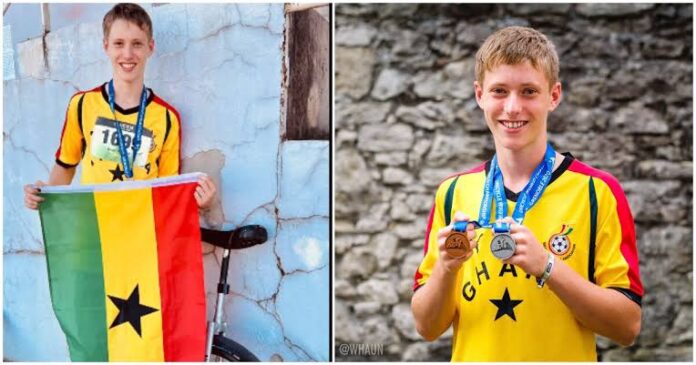 Roger Haun III, a cyclist based in Nalerigu, made history after winning Ghana’s first medals at the Unicycling World Championships.

The young rider, who has lived with his father in northeast Ghana for the past nine years, won silver and bronze medals at the championships.

He defeated his competitors in the 15-16 year old men’s 30 m wheel walk race and finished second to win a silver medal.

In the 50-meter unicycle event, the teenager made another courageous performance, taking third place and the bronze medal.

In a post on Twitter, the cyclist’s father, William Haun, expressed his satisfaction with his son’s historic achievements.

Monocycling is a little-known sport in the West African country, but it includes more than 35 different disciplines, such as team, individual, artistic or extreme sports.

This year’s championship is currently taking place in Grenoble, France, with thousands of athletes participating.

Meanwhile, the Ghanaian team is also guaranteed to win at least two medals at the 2022 Commonwealth Games, thanks to the exploits of the country’s boxers.

This comes after Joseph Commey dominated Alex Mukaka on Wednesday to advance to the semifinals of featherweight competition.

The Ghanaian’s entry into the semi-finals means he has secured at least one bronze medal at the Commonwealth Games.

Later the same day, Wahid Omar became the second Ghanaian to secure a medal at the Commonwealth Games after defeating Alston Ryan to qualify for the semifinals of the men’s welterweight competition.

Both Commey and Omar are now hoping to qualify for the finals of their respective competitions, where they can take home a silver or gold medal.