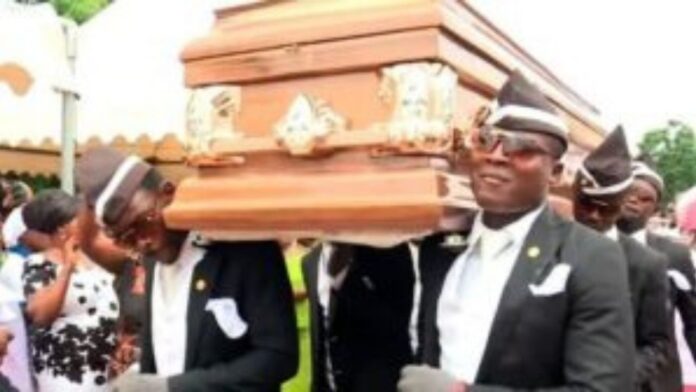 Two years after videos and memes of Ghanaian pallbearer Benjamin Aidoo and his pall bearing team; went viral during the Covid 19 Lockdown; an NFT of the Coffin Dance meme has been sold for over $1 million.

On Saturday, the winning bid was announced on Twitter.

The meme NFT was released by the lead pallbearer, Benjamin Aidoo; and Matthew “DigiNeko” Ordrick, who uploaded the video on YouTube.

“Congratulations to the official owner of Coffin Dance world fame @3fmusic  We would like to say thank you to everyone who supported our NFT, especially guys from the @Bads_Zlodei: Dmitry Makarov, Eugene Lapitsky, Mykhailo Vatazhok,” Mr. Aidoo tweeted.

The coffin dance meme NFT sold for 372eth (Ethereum) which is equivalent to the sum of $1.046 million.

According to data available on Africa Facts Zone, it was auctioned to @3FMusic on April 9, 2022, after an intense bidding session.

The Coffin Dance meme originated from a video of the Ghanaian group of pallbearers based in the Greater Accra Region of southern Ghana.

The leader pallbearer is Benjamin Aidoo, and the group garnered worldwide attention in 2020. The group became an Internet meme in March 2020 when the video was uploaded with Tony Igy’s EDM song “Astronomia.” The meme is often associated with the COVID-19 pandemic.

A non-fungible token is a non-interchangeable unit of data stored on a blockchain; a form of digital ledger, that can be sold and traded.

Types of NFT data units may be associated with digital files such as photos, videos, and audio.