“I Have Slept With With Over 1,000 Men,” Ghanaian Sex Worker Reveals 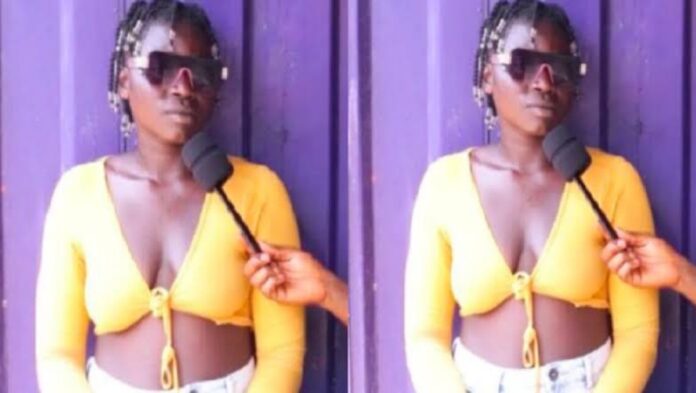 A 22-year-old Ghanaian revealed that she has slept with over 1,000 men.

The young woman, a popular escort in Ghana known as Gifty Osei aka Ohemaa Baddest, made the revelation in a recent interview with SVTV Africa where she spoke about her career as an exotic dancer and sex worker.

According to her, she lost her virginity at age 10 and since she lost her chastity at that young age, she has had sex with over 1,000 men.

She said that despite the dangers her work entails, she became addicted to it.

“I can’t count. There are many… about 1000 men. I was also with a lady. My best friend pointed this out to me. I didn’t know she was a lesbian. We’ve been together for four years. She’s the only girl I’ve been with.

“A group of eight guys raped me, took my stuff and kicked me out. A taxi driver did the same. It’s a risky business, but I still haven’t decided when to stop because I’m addicted to it,” she said.

Also, read; “I Will Be Coming To Ghana Soon To Work With Ghanaian Artists,” Nicki Minaj Announces On Instagram

Meanwhile, Ghana’s economic crisis appears to be affecting all sectors, with sex workers also bearing the brunt of the collapse.

On some well-known streets in Accra, the capital of Ghana, most commercial sex has been preferred by Nigeria, Côte d’Ivoire and Liberia for years.

Despite their bold approach to the craft, they always find clients that make them question their career choices.

“Some people don’t come quickly. If you know you won’t be fired sooner, you need to give her more money. You have to pay the girl well to make her happy,” one of the sex workers said in a report cited by local media.

Since rising fuel prices, which have affected the prices of goods and services in most parts of the world, sex workers have not been able to please their clients with the same prices they originally charged.

Most sex workers have increased their rates by up to 100%.

Lapaz, Cantonments, Osu, East Legon are some shopping spots in the city.