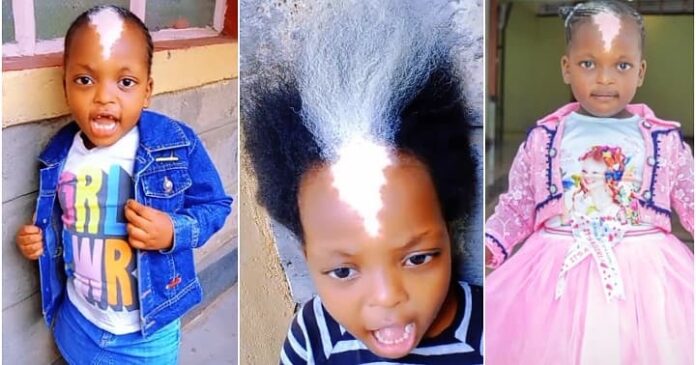 A little girl with white hair on her forehead and a shiny birthmark drew massive reactions on social media.

In a video circulating online, the beautiful girl was seen lying down while singing a local song.

Her birthmark sparkled as she looked straight into the camera and netizens praised her beauty in the video shared on TikTok.

While some netizens called her a special child, others just expressed shock at her rare facial appearance.

@jeremiahujerekre1 said: “So the child’s parents have a feeling they just gave birth to an angel in the form of a human. I saw a very similar case… a very special person.”

@user3857607215165 she wrote: “Beautiful nature of God, please don’t try to change it. This type is a natural blessing anointed by God Himself.

@frankly_jb commented: “Special boy. I saw a father and father with such a unique appearance. May your good life purpose manifest soon.”

@tonny_fiifi363 commented: “OMG. This is a flash costume, I love it so much. Kisses. Please take good care of this angel. Tell her Tony loves her so much.

Recall previous reports about the photos of a handsome black boy with huge birthmarks caused massive reactions on social media from thousands of people who saw them.

In the images featured in the personal name of @whotmaan, the social media influencer stated that he had already seen the images elsewhere and couldn’t resist the temptation to share them.

The marks were all over the boy’s body, with the huge chunk on his face, but he still looked amazing.