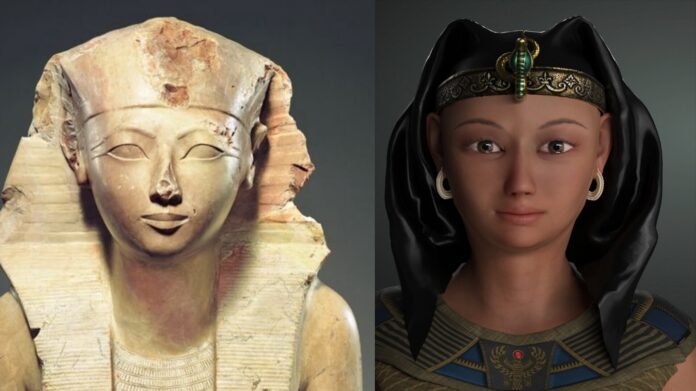 Hatshepsut, sometimes written Hatchepsut, was the first female pharaoh of Egypt (reigned in her own right from around 1473 to 58 BCE).

She gained unheard-of levels of power for a woman by assuming the full titles and regalia of a pharaoh.

Hatshepsut, the daughter of King Thutmose I, ascended to the throne of Egypt when she got married to Thutmose II (the son of the lady Mutnofret) at the age of 12 or 13.

Hatshepsut expanded Egyptian trade and managed large-scale construction initiatives, perhaps most famously the Temple of Deir el-Bahri in western Thebes, where she was laid to rest.

Hatshepsut was portrayed (on her own commands) as a male in several contemporary paintings and sculptures, but historians were mostly unaware of her existence until the 19th century.

She is one of Egypt’s few and most well-known female pharaohs.

Around 1492 BCE, Thutmose II, who had Hatshepsut as his consort, ascended to the throne after three of Mutnofret’s older sons died tragically young. Neferure was Hatshepsut’s only child; she had no sons.

She started serving as her stepson Thutmose III’s regent after he passed away, but she soon assumed all of the responsibilities of a pharaoh, taking over as co-ruler of Egypt in 1473 B.C.

The move may have been motivated by a political crisis, such as a threat from another branch of the royal family, and Hatshepsut may have been acting to preserve the throne for her stepson, contrary to the belief of earlier Egyptologists who held that the queen’s actions were solely motivated by ambition.

Hatshepsut was a perfectly typical regent for the first several years of her stepson’s rule. However, she became king and took on a full royal titulary by the end of his seventh regnal year (the royal protocol adopted by Egyptian sovereigns).

Egypt was now ruled by Hatshepsut and Thutmose III, with Hatshepsut firmly in the lead. Hatshepsut had previously been shown as a conventional queen, complete with a female form and clothing that were acceptable for a woman.

However, following a brief period of experimentation that involved pairing a female body with kingly (male) trappings, her formal portraits started to represent Hatshepsut with a male body, wearing the conventional regalia of a kilt, crown, and artificial beard.

Hatshepsut never gave an explanation for why she ascended to the throne or how she convinced Egypt’s monarchs to support her in her new role.

Nevertheless, a team of devoted bureaucrats who held all of the important positions in her government and were frequently selected was a crucial component of her success.

The most notable of these was Senenmut, who oversaw all royal projects and served as Neferure’s instructor. Some researchers claim that she might have been lovers with Senenmut.

The ancient Egyptian pharaoh guarded their territory against the foes that waited at its boundaries. Generally speaking, Hatshepsut’s reign was calm, and her foreign policy was centred more on trade than on conflict.

However, depictions on the walls of her Dayr al-Bar temple in western Thebes imply that she started with a brief, fruitful military campaign in Nubia.

She altered the hypostyle hall of her earthly father at the Karnak temple complex, constructed a barque shrine (the Red Chapel), and erected two pairs of obelisks.

She constructed a rock-cut temple in Beni Hasan in Middle Egypt, which is known as Speos Artemidos in Greek.

The Dayr al-Bar temple, which she built as a memorial for Hatshepsut and which was devoted to Amon-Re and featured chapels for Osiris, Re, Hathor, Anubis, and the royal ancestors, was her greatest accomplishment.

She managed to start a building program that resulted in the construction of a huge temple at Deir el-Bahari in Luxor, and her administration was largely tranquil. She also led a successful maritime expedition to the country of Punt, which was perhaps on the north-eastern coast of Africa.

There, they conducted trade with the locals and brought “marvels” back. Hatshepsut permitted Thutmose to become more involved in government issues as her reign came to a close; after her passing, Thutmose III ruled Egypt by himself for 33 years.

An effort was undertaken to eradicate any remains of Hatshepsut’s power at the end of his reign. Her monuments were vandalized, her statues were destroyed, and she was removed from the list of recognized kings.

Early academics regarded this as a revenge deed, but it appears that Thutmose was making sure that the succession would continue uninterrupted from Thutmose I through Thutmose II to Thutmose III.

Hatshepsut was forgotten about until 1822, when the Dayr al-Bar inscriptions could finally be read, thanks to the decoding of hieroglyphic lettering.

The Thutmoside succession was initially unclear due to the difference between the female name and the male representation, but it is now generally understood.

Hatshepsut battled to defend the legitimacy of her power grab by citing her royal ancestry and asserting that her father had chosen her to be his successor. She was aware that her attempt to seize power was highly contentious.

In an effort to remake herself, she requested that she be depicted as a male pharaoh with a beard and bulky muscles in statues and paintings from the time. She did, however, show up in other pictures dressed as a woman.

Senenmut, her chief minister, and other followers surrounded Hatshepsut in important positions of power.

As pharaoh, Hatshepsut oversaw large-scale construction initiatives, particularly in the region surrounding Thebes. Her most notable creation is the enormous memorial temple at Deir el-Bahri, which is regarded as one of the seven marvels of ancient Egyptian architecture.

A trading mission she sponsored during her reign brought enormous riches to Egypt from a remote region known as Punt, including gold, ebony, leopard skins, and incense (possibly modern-day Eritrea).

The Legacy and Death of Hatshepsut

Hatshepsut most likely passed away in her mid-forties, around 1458 B.C. She was interred in the Valley of the Kings, which is situated in the hills behind Deir el-Bahri and is also the location of Tutankhamun.

She had her father’s sarcophagus reburied in her tomb so they might rest together in death in an effort to further legitimize her rule.

Thutmose III continued to govern for another 30 years, demonstrating that he was a superb warrior as well as an ambitious builder like his stepmother.

Late in his rule, Thutmose III had almost all traces of Hatshepsut’s rule removed, including the representations of her as king on the temples and monuments she had erected.

This may have been done to erase her legacy as a formidable female ruler or to close the gap in the line of male heirs of the dynasty.

As a result, Hatshepsut’s presence was scarcely known to ancient Egyptian researchers until 1822, when they were able to decipher and read the hieroglyphics on the walls of Deir el-Bahri.

One of the three tombs that Hatshepsut had constructed was found by the British archaeologist Howard Carter in 1903, although it was empty, much like the majority of the tombs in the Valley of the Kings.

Her mummy was found in 2007 after a new search was launched in 2005; it is now on display in Cairo’s Egyptian Museum. At the Metropolitan Museum in New York City, a life-size statue of a seated Hatshepsut that evaded her stepson’s destruction is on exhibit.