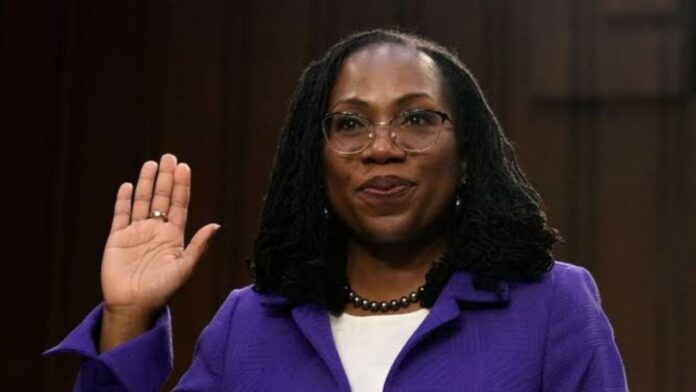 She was confirmed as the first black female justice with a 53-47 approval vote; which was mostly along party lines but with three Republican votes. Presiding the session was Vice President Kamala Harris, who is also the first Black woman Vice President.

Judge Jackson will however take her seat when Justice Stephen Breyer retires this summer; thereby solidifying the liberal wing of the 6-3 conservative-dominated court.

Last month, during the four days of Senate hearings Ketanji Brown Jackson spoke of her parents’ struggles through racial segregation and said her “path was clearer” than that of her parents as a Black American after the enactment of civil rights laws.

The first black female justice at the Supreme Court attended Harvard University, served as a public defender, and worked at a private law firm; before getting appointed as a member of the US Sentencing Commission.

Jackson will also be just the third Black justice, after Thurgood Marshall and Clarence Thomas; as well as the sixth woman.

The first black female justice will join three other women, Sonia Sotomayor, Elena Kagan, and Amy Coney Barrett. Four of these nine justices will be women for the first time in history.

Ketanji Brown Jackson will secure a legacy on the Supreme court for Biden, and also fulfill; his 2020 campaign pledge to nominate the first Black female justice.

“This milestone should have happened generations ago… but we are always trotting on a path towards a more perfect union. Nevertheless, America today is taking a giant step towards making our union more perfect,” Democratic Senate Majority Leader Chuck Schumer said. “People sometimes talk about standing on the shoulders of giants; well, Judge Jackson will go down in history as an American giant upon whose shoulders others will stand tall. And our democracy will be better off for it,” he added in a report to Guardian News.