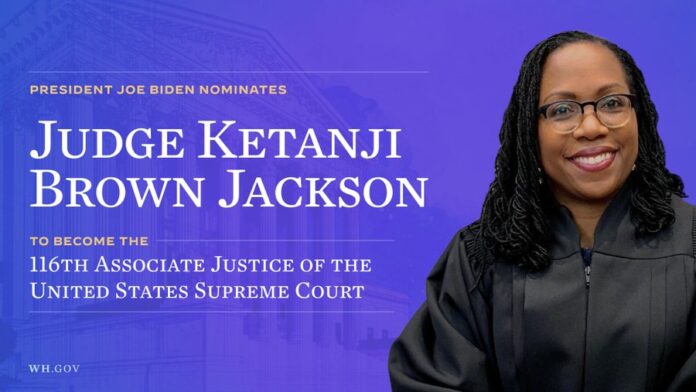 The President of the United States, Joe Biden, has nominated federal trial court Judge Ketanji Brown Jackson to the Supreme Court; making her the first Black woman nominated to serve on a court that once endorsed segregation and declared her race unworthy of citizenship.

President Joe Biden introduced Judge Ketanji Brown Jackson, as a “proven consensus builder”; who has “a pragmatic understanding that the law must work for the American people.” …”She strives to be fair, to get it right, to do justice,” the president said.

I’m proud to announce that I am nominating Judge Ketanji Brown Jackson to serve on the Supreme Court. Currently serving on the U.S. Court of Appeals for the D.C. Circuit, she is one of our nation’s brightest legal minds and will be an exceptional Justice.https://t.co/iePvhz1YaA pic.twitter.com/Nzqv2AtN8h

Through this Nomination, Joe Biden has delivered on a campaign promise to make the historic appointment; and to further diversify a court that was made up entirely of Caucasian men for almost two centuries.

Ketanji Jackson will also be the current court’s second Black justice following Justice Clarence Thomas, who is a conservative.  In addition, Jackson will replace liberal 83 year old Justice Stephen Breyer; who is set to retire at the end of the term this summer, maintaining the court’s 6-3 conservative majority.

Judge Ketanji Jackson in a brief remark, thanked President Biden as she acknowledged that she was; “humbled by the extraordinary honour of this nomination.” She highlighted her family’s first-hand experience with the entirety of the legal system, as judges, lawyers, police officers and an incarcerated family member.

As she stood alongside Biden at the White House on Friday, she spoke of the historic nature of her nomination; saying that she shares a birthday with Constance Baker Motley, the first Black woman to be confirmed to the federal bench. 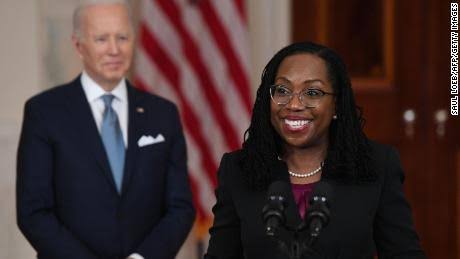 “If I’m fortunate enough to be confirmed as the next associate justice of the Supreme Court United States; I can only hope that my life and career, my love of this country and the Constitution; and my commitment to upholding the rule of law and the sacred principles upon which this great nation was founded; will inspire future generations of Americans,” Jackson said.

The 51 year old, who once worked as a law clerk for Breyer early in her legal career, attended Harvard as an undergraduate and for law school; and then served on the U.S. Sentencing Commission, before becoming a federal judge in 2013.

Jackson’s nomination is however subject to confirmation by the Senate, where Democrats hold the majority by a razor-thin 50-50 margin with Vice-President Kamala Harris as the tie-breaker. Party leaders have promised swift but deliberate consideration of the president’s nominee.