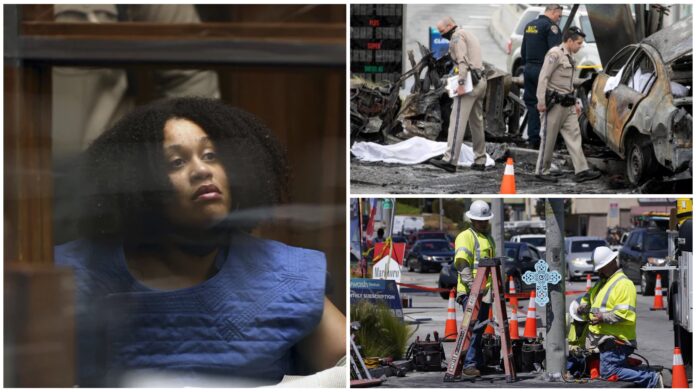 A Houston nurse was charged on Monday, with six counts of murder and five counts of gross negligence in the accident that killed six people, including a child and a pregnant woman, Could face 90 years in Prison.

Nicole Linton, 37, was behind the wheel of a Mercedes-Benz that ran through a red light on Slauson and La Brea avenues last Thursday and collided with several other vehicles in the Windsor Hills area, according to the CHP.

The six people killed included all members of a family—Asherey Ryan, 23, the child she was pregnant with, her boyfriend, Reynold Lester, 24, the father of her unborn child, and her 11 months old son Alonzo, who was just short of his first birthday.

The charges include six counts of murder and five counts of involuntary manslaughter. District Attorney George Gascón said his office cannot charge manslaughter in a case involving a fetus.

“This is a case that will always be remembered for the senseless loss of so many innocent lives as they simply went about their daily routines,” Gascón said in a statement.

Linton, who was in a wheelchair, made his first court appearance in the case on Monday. She did not comment on the case, and her next hearing was scheduled for August 15.

If convicted as a defendant, she faces 90 years in prison, Gascón said. According to prosecutors, Linton has a history of mental health issues and a history of problematic driving, including not having a California driver’s license and his involvement in a 2020 traffic accident that caused bodily harm.

Linton was also believed to pose a flight risk as she works as an itinerant nurse, so her bail was not rechecked.

Surveillance video from the crime scene showed the Mercedes running through a red light in a 35-mile zone in La Brea at a speed estimated by authorities to be about 100 miles per hour (ca. 161 km/h), dodging another vehicle that burst into flames.

He was pushed into at least one other vehicle, and they both ended up against a gas station sign on the corner of the intersection. The force of the impact left a trail of flames across the intersection.

Two other women who died in the accident have not yet been identified, according to Gascón. The occupants of six other vehicles, including five in an SUV and another driver in another vehicle, were also injured.

“While the wreckage of this fire accident at this intersection has been removed and traffic has finally resumed, there is catastrophic damage to the families and friends of the dead and injured,” Gascón said.

“It’s a tremendous loss not just for the families but for our entire community who learned of this incredible tragedy or saw the now viral video of the collision.”

Gascón said there is no evidence that alcohol or drugs played a role in the accident, but it has not yet been ruled out.

Linton was arrested on Friday while she was hospitalized for moderate injuries sustained in the crash. She was released from Ronald Reagan UCLA Medical Center over the weekend and was being held on $9 million bond, according to prison records.