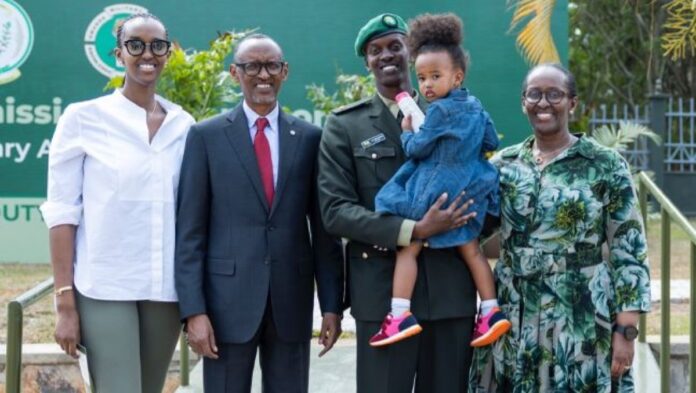 Ian Kagame, son of Rwandan President Paul Kagame, joined the RDF Presidential Guard months after graduating and as part of the Rwandan Army.

Ian made his first public appearance in his new mission at the annual National Prayer Breakfast held on Sunday.

Photos of Ian appeared on social media along with other RDF members.

Last August, Ian was promoted to second lieutenant during a graduation ceremony at the Royal Military Academy in Sandhurst, UK. after enrolling in college in 2021.

The ceremony was attended by President Kagame and First Lady Janet Niramunji Kagame.

Also, read; Pele Named Secret Daughter in his £13million Will, Despite Earlier Denying Her

“This is a proud moment. Congratulations Ian, thank you for the joy you brought us, this gala was a celebration of books,” Janet tweeted after graduating in November.

A highly skilled officer, the third son, Ian, is tasked with ensuring the safety of the country’s supreme commander.

His recent role has led many to suspect he might follow in the footsteps of General Muhozi Kinyrugaba, son of Ugandan President Museveni, who previously served in the Special Forces Command (SFC), the elite equivalent of the RDF’s Presidential Guard.

Mohozi served as Commander of Special Forces from 2008 to 2017 and again from December 2020 to 2021 before being promoted to Commander of Ground Forces.