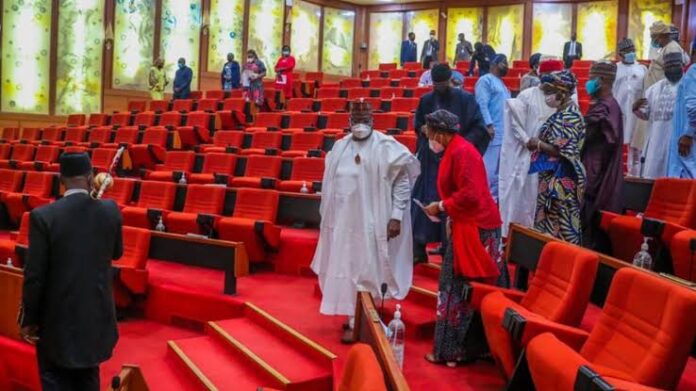 After the new Covid-19 was detected in Souty Africa, Countries like the UK and Canada; went ahead to place travel restrictions on several countries of which Nigeria is one of them. However, in retaliation, effective Tuesday 14th December 2021; Nigeria is imposing a travel ban on Canada, the United Kingdom as well as Saudi Arabia.

The UK had imposed travel restrictions on Nigeria; claiming that 21 cases of Omicron recorded in England were linked to travellers from Nigeria. But the travel ban was smeared by global outrage with some national and international stakeholders describing it as racist and discriminatory.

The federal government of Nigeria had also condemned the decision of the UK; describing it as discriminatory, unfair, punitive, indefensible, and unjust.

In a leaked voice note obtained by a Nigerian Media Outlet, The Nigerian Minister of Aviation, Senator Hadi Sirika; stated that the decision to ban these countries in retaliation would be made by the Presidential Steering Committee (PSC) on COVID-19 latest by Tuesday.

“Also, there is a case of Saudi Arabia, which put Nigeria on the banned list – no visa, no travel, et Cetra. So also Canada. So, today, there was a meeting, I participated in a zoom meeting, COVID-19 task force, just for your information also.

“We have given our input in aviation, it is not acceptable by us and we recommend that those countries; Canada, the UK, Saudi Arabia, and Argentina be also put on Red List, as they did similarly to us.

“If they don’t allow our citizens to go into their countries who are their airlines coming to pick from our country?

“So, I am very sure that in the next few days, between now and Monday, or perhaps Tuesday; at maximum, all those countries will be put on the red list from the PSC; (Presidential Steering Committee) from the task force of COVID-19. Once they are put on the red list; which means they are banned, of course, their airlines will be banned.

“I’m so sorry, we are going through a difficult moment; but we have to do it in the interest of our country,” Sirika explained.