Inside the Machina Emirate of West Africa, where Humans and snakes are brothers 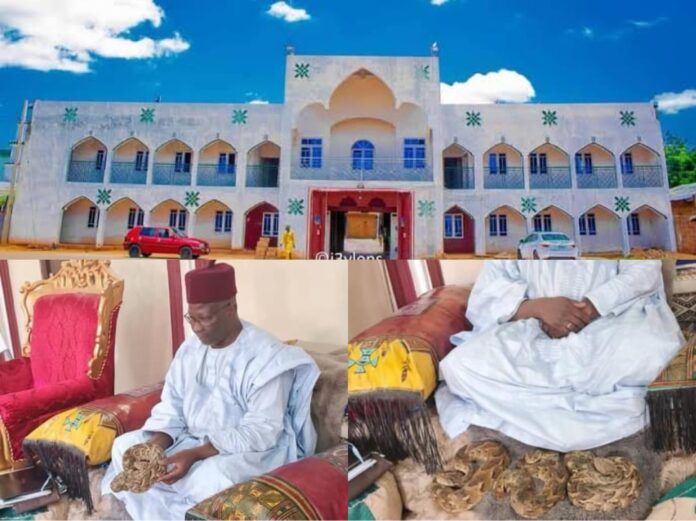 Humans and serpents have been known to have a conflicting relationship, that of mutual fear for each other. Biblically, the serpent is the enemy of mankind. However, in the Machina Emirate, Yobe state Northeastern part of Nigeria in West Africa, Snakes are regarded as brothers and also as royalty according to the myth of a Queen who gave birth to Twin sons, one a human and the other a snake. And as such, till this day, snakes and human beings are friends and do not harm each other.

Located about 300 kilometres north of the state capital, the Machina Emirate is one of the remotest towns in Yobe State, Nigeria. This emirate prides itself of a rich cultural and historical background.

It is believed in Machina, that royal blood runs through the veins of the snakes and In fact, the snakes  consistently pay homage to the Mai Machinama palace; where their ancestor was born, as a twin to one of their ancestral kings.

The Royal Snakes of Machina

According to history, a queen in ancient times gave birth to twins in the palace, one a human being and the other a snake. Because the other twin was a snake, it couldn’t stay long with its mother the queen; and as such it found its way into the rocks behind the emir’s palace; where it is said that its descendants still enjoy all the privileges that come with royalty.

It is also believed that, just like the Machina Emirate, the ancestor of the snake procreated Snake kings, queens and princesses; all who were of equal status with their human relatives in the kingdom.

According to the Emir of Machina (Mai Machinama), His Royal Highness, Dr. Bashir Albishir Bukar (OON); the twin snake started its generation like a regular human family immediately after it went into the rocks behind the palace;

“Since then, their lineage has continued, just like human beings. I am the 77th Mai Machinama, so there must be one snake that has attained the same position in their kingdom,’’ he said.

The Snakes and the Machina People

The Emir also revealed that during his father’s installation as emir, many snakes came out and gathered at the palace entrance and socialised with people of Machina without causing any harm.

The Emir also tells of a mysterious encounter the snakes had with a media crew that came to cover the event. Out of curiosity, some of the journalists attempted to photograph the snakes, but the moment they fixed their cameras on them, the snakes got out of sight.

“After the futile struggle, they all gave up and went back with miraculous stories to tell. It is only by our acceptance that one can get their pictures. Our children snapped pictures of the snakes within the palace because they consider them as their brothers,” he said.

He further narrates; “When I was turbaned, there were old snakes at the occasion; just like the young ones usually come to the palace whenever my wives are giving birth. So we are doing everything together with them in this palace”.

“When I married my younger wife, a snake came to the house and spent more than a week. The guests were afraid, but I assured them that it would not harm anybody. In the morning, it would come out and spread itself on the wall, then varnish in the afternoon. It would do the same thing in the evening and varnish. Initially, my bride was afraid, but she later became used to it. So the snakes are our brothers; they don’t harm anybody in Machina.

Killing a snake is forbidden

“As I sit here, a snake could come and curl under my chair. I feel happy seeing them around. But each time I see them around, I will pray and hope it’s for good because something will definitely happen. Whenever my wives are about giving birth, you will see the young snakes coming out, a sign that something is going to happen,’’ he added.

According to Dailytrust, that one of the princes usually sleeps in the same bed with a snake. “Each time he goes to sleep and finds a snake in his bed, he will just push it aside and sleep alongside it,’’ he said.

In the Machina Emirate, the killing of snake is forbidden because they are considered as having royal blood. The snakes don’t harm anybody; however, they retaliate when someone tries to harm them.

The Emir of Machina further told of many instances where people disobeyed the law forbidden any harm on snakes and eventually paid dearly with their lives. Because it is a norm in Machina that every visitor must be educated that snakes are not harmful and must not be harmed.

Consequences of Harming a snake

“I will give you three examples. There was a snake charmer who came to Machina. One night, a snake came out and his people started shouting. People said he should allow it because it would go its own way, but the snake charmer insisted that it was a dangerous creature; so he tried to kill it. He thought that as a snake charmer he had the medicine to do whatever he wanted, When he followed the snake, trying to step on it, it reacted and attacked him. He was rushed to his master’s house to get an anti-venom medicine; but he eventually died in the toilet while trying to bath with the concoction. Sadly, the snake also died.” The Emir says.

“Also, there was a truck driver from another town who came to Machina to drive my father’s truck. He came with his first wife and married a second one in this place. One evening, a snake came into their house and the first wife, who is not from Machina, shouted. Her husband rushed in from outside, looking for the snake, but the woman from Machina told them not to bother, saying it would leave without harming anybody. But their husband said he would not stay with a dangerous creature in the house. The first wife pointed to a hole where the snake hid and the first wife boiled water and assisted the husband to pour it into the hole.

Miraculously, the woman, who was pregnant, gave birth to a baby girl with features of a snake. She used to crawl like a snake. I knew the girl when I was young; if you heard her speak you would think she was a complete human being, but if you saw her, she was just terrible. She couldn’t walk, so her parents used to carry her in a basin until she grew up to the age of 18 when she died,’’ he narrated.

The emir further narrated that his father had a farm and when the servants and other people in the community went to clear it; a snake came out and people started screaming. But as the snake crawled away a stubborn youth killed and threw it on a termite hole.

“You know, during the onset of the rainy season, termites would come out en masse with grains. As the man threw the snake on the anthill, surprisingly, all the ants went back to their hole and none of them came out. In the evening, the young man’s house became filled with snakes. The man metamorphosed into a snake-like creature and started crawling, hissing and became terribly sick.

“Later, the young man was taken to the emir’s palace where clerics gathered. They prayed and he survived that day, but it became a seasonal sickness he suffered until his death. These are just few examples I can give. That is why we don’t kill snakes here,’’ he added.

The people of Machina Care for the snakes

“At times I personally rescue them, especially when they fall into a ditch. But my son was telling me that sometimes he would sleep with a snake in the same bed.

“In the olden days, there was a place we used to put milk for them.

If we made sacrifices we threw it around the area, believing that they would use it. But we don’t eat or play that much with them,’’ he explained.

Speaking on if there any instances of provocation between the people and the snakes, the emir said; “…there was a time when the perimeter fence of the palace collapsed, and in the course of rebuilding it, they forgot to leave a hole where the snakes used as passage to the palace. An hour later, the wall collapsed, they rebuilt it and the concrete collapsed again. Then one of the courtiers observed that a hole that the snakes were using to enter the palace was blocked. They turned the blocks and made some holes there before the wall stood.’’