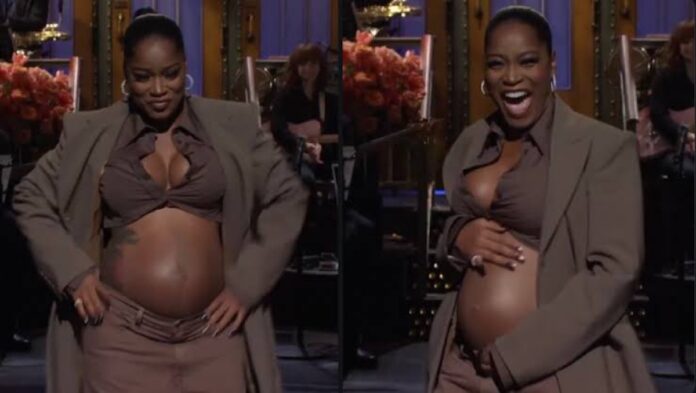 Actress Keke Palmer is pregnant and expecting her first child with boyfriend Darius Jackson. The 29-year-old revealed this while hosting Saturday Night Live for the first time this weekend.

“There are some rumors going around and people have been saying in my comments, ‘Kiki is having a baby, Kiki is pregnant,’ and I want to set the record straight!” Palmer exclaimed, unzipping a long gray sweater to reveal her baby bump on stage at Studio 8H.

“I gotta say, though, it is bad when people on the internet spread rumors about you y’all, but it’s even worse when they’re correct. I mean, like, I was trying so hard to keep it on the down low, cause I got a lot of stuff going on, you know?” she continued. “… But honestly this has been the biggest blessing, and I am so excited. Guys, I’m going to be a mom.”

Palmer basically kept the details of her relationship with Jackson under wraps. While appearing on The Tamron Hall Show last November, she opened up about becoming an “Instagram official” with Jackson, although the photos with her boyfriend are no longer on her page.

“It’s just gotten a lot harder to hide,” she said of the decision to post the photos with Jackson at the time. “We spend all our time together and he really is my closest friend so he’s becoming something that I won’t hide which makes me happy.”

Palmer added, “It won’t be everything you see, my job is my job but at the end of the day it’s someone I care about so why not?”

Busy and busy, Palmer launched her podcast Baby, This Is Keke Palmer, all the while landing new roles and launching her own digital television network. She is certain that adding her mother to her growing list of accomplishments will have her work cut out for her.